Just starting to flower is Jeffersonia dubia, fun to watch as they emerge, the foliage is beet red and rubbery looking (Photo 1). My plants are from a good dark color form, just opening their first couple blooms... flower color is deeper than what the photo captured. However, I wanted to showcase a form that Darrell Probst collected, CPC 3.10.97 (Cobblewood Plant Collection), selected on account of it's dark flowers (although my normal form are darker) and the red seed pods. In full flower on 04-04-2010, I note some other differences: the ovary is red (green in other dubia forms) and the stamens dark tipped (light color in other dubia forms).

Sun is very strong today, and my daughter's cheap entry-level Nikon Coolpix does a terrible job with white or light-colored flowers, and after several tries, settled on these washed out looking photos, but it is the best I can do. In the last photo, I used a sun baffle to tone down the bright light. 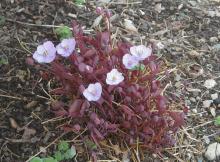 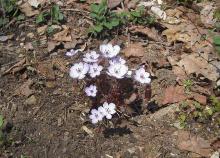 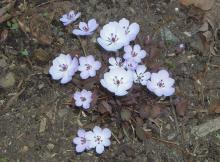 A 2009 "normal" J. dubia with a few extra petals.  I like the variation of leaf form whthin the species too.  I use a perhaps better quality, but still a point and shoot camera - a Lumix TZ4.  It has an exposure setting I have since learned to used to my advantage for light color rendition.  I'll bet the Coolpix has something similar.  In fact most of my flower pics are now taken with an exposure of minus .5 to minus 1.

The second pic is the same plant today.  I guess it really likes where it is.  The anticipation is killing me. 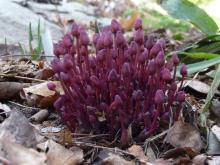 Wow, what an absolutely spectacular plant, Rick!  My very modest ones have not even started to emerge yet.

It's pretty easy to see that the dark colored stamens show up a lot better on Mark's, and in my eyes are much more attractive.  I can't decide whether I like the green or the red ovaries better.

I had to look for my own Jeffersonia which grows in deep shade of a conifer, and there it was but not more than an inch or two! Nice to see what comes!Where do you grow your plants?

Does anyone know of any attempts at hybridizing the American Jeffersonia diphylla with the Asian J. dubia?  This year I have J. diphylla ready to bloom, with bloom time overlapping, with J. dubia, and wonder if hybrids are possible, and then again, why even try when the theoretical hybrids might inherit the bad habit of American J. diphylla blooms lasting just a single day.  But now that I have two different J. dubia clones to play with, maybe I'll give it a try.

The American plant, even though flowering is ridiculously brief (1 day), is still a good garden plant; short when flowering, but after flowering the stems and foliage get rather largish to 18" tall or so, and as broad, forming a most handsome display, worth growing for the unique "twinleaf" form and the intriguing large pipe-like fleshy seed pods that open up as if a hinged pot lid.

The American species does not like disturbance, so the first photo shows a seedling plant now growing within several feet of its Asian relative.  Photos 2 and 3 show the now 22-year-old clump of J. diphylla, never getting overly large in size but always showing up in a part of my woodland that is too far to reach with a hose and largely goes uncultivated.  The second shot was taken today under cloud cover, the 3rd shot when suddenly the late afternoon sun shone though, giving a different aspect of this handsome woodlander. 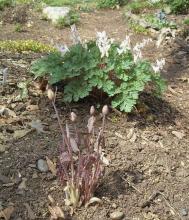 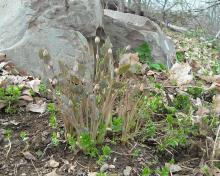 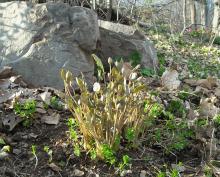 A 2009 "normal" J. dubia with a few extra petals.  I like the variation of leaf form whthin the species too.  I use a perhaps better quality, but still a point and shoot camera - a Lumix TZ4.  It has an exposure setting I have since learned to used to my advantage for light color rendition.  I'll bet the Coolpix has something similar.  In fact most of my flower pics are now taken with an exposure of minus .5 to minus 1.

The second pic is the same plant today.  I guess it really likes where it is.  The anticipation is killing me.

Rick, your Jeffersonia really does have great "flower power".  Keep a watch on your mult-petallous ones, maybe worth separating out.  Mine are quite consistent, although rather darker flowered than many (I need to post some photos taken in a friends garden, where my plants came from).  In most years, I forget about cleaning them up in late fall or the winter, so the mass of old stems creates a mess that can be tugged at and mitigated to some extent, but otherwise detracts from the spring flower show.

My Jeffersonia dubia plants were advancing more today, thanks to another rather warm sunny day, so a couple of photos ensue.  I also include a few photos from 2009, where flowering in afternoon light caught my camera's attention.  Note the image dates, we're 2 weeks earlier this year than last year, also earlier than in the last 10 years.  The last photo is taken in my friend's garden, Marsha Russell, a very shaded garden where the bright sun-induced red emerging foliage was not so prominent, showing lovely blue flower shades. 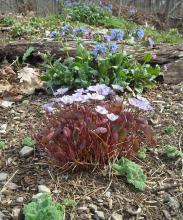 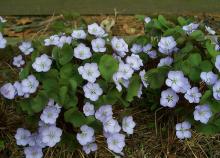 And I thought I might be the only one attempting the cross of the two species.  Thought about it last summer.  Mine don't overlap bloom time, but I don't think storing the dubia pollen for the short time would be a problem.  Freezing it might also be an option, as they do with Lilium pollen.

Oh if you could only see the mom of the plant I posted here.  Single flowers only, but a most exquisite iridescent blue hue to the lavender.  And the petals sparkle!

Regarding crossong, I have a potential problem: this J. dubia never sets seed, while my other plants do.  What plant part(s) seem to be sterile, I don't know.

Do you need fresh seed to get get good results or can old seed do?

Do you need fresh seed to get get good results or can old seed do?

Trond, I believe the seed is ephemeral and needs to be planted shortly after harvesting.

Rick, it's too bad your special form isn't setting seed... maybe that particular plant is sterile.

My plants set lots of seed.  I would always get a few self-sown seedlings, but a few years ago I started "assisting" the plant by scratching in the seed, sowing it in situ, and that has worked really well.  They'll make a decent little flowering clump in 3 years.  Just checked yesterday, and batches of seed are coming up... in the first photo, the just-emerging seed is within inches of the mother plant, so I assume this was not sown by me, but is just self-sown seedlings.  The second photo shows a couple 2-year old seedlings, to the right of the pink Corydalis solida.