Applications for grants must be received by March 1, 2023. See application form below. Recipients will be announced at the annual meeting Nova Scotia. 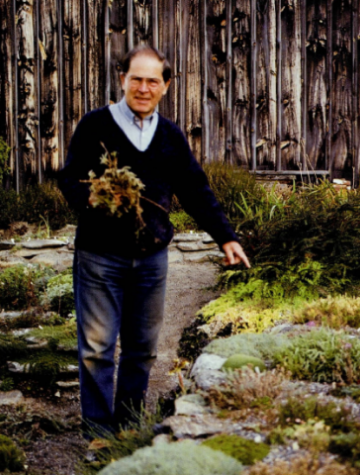 The NARGS Endowment Fund was set up in 1983 upon the recommendation of Norman Singer, the society’s secretary, and approved by the board in 1984. The interest accruing from the funds in the endowment was restricted to special projects, rather than operations of the society.  In 1992, the NARGS board adopted guidelines for use of the funds and a committee appointed to recommend grants.

Norman held various positions in NARGS including president (1992-1994), and he received numerous awards from the society, including the Award of Merit and the Marvin Black Award.

Norman served in the U.S. Army in World War II, assigned to Bletchley Park (U.K.) as a code breaker. He became a performing arts administrator in New York City, including Lincoln Center, and the Aspen (Colorado) Music Festival. He and his long-term partner, Geoffrey Charlesworth, whom he had met at Bletchley, retired to Sandisfield, Massachusetts, in 1981.

Norman died in 2001, age 80, and the endowment fund was renamed to honor his contributions to NARGS.

$1,100.
Green Spring Gardens, Fairfax County Park Foundation -Renovate degraded area of the existing rock garden by creating a new crevice garden area.
$1,400.
Jasper Johns: Goal is to elucidate the gene(s) responsible for adaptive alpine dwarfism in Aquilegia jonesii and to identify the genes responsible for growing it (soil drainage, composition, pH, watering and light schedules, etc.). This will contribute to the knowledge of how alpine plants grow in the wild but how they can be optimally cultivated in our homes

$2,000
New England Wildflower Society. Funding to cover expenses associated with the recognition of the Trillium collections with the North American Plant Collections Consortium.
$2,000
Susann Nilsson, Amateur botanist with excellent references.  Funding required to cover travel and research in order to write a monograph on the Genus Pulsatilla.

$1,500
The Iowa Arboretum for installation of alpine rock garden.