Another one is the Iranian Allium elburzense. These are seed-raised why a little variation in colour is possible. 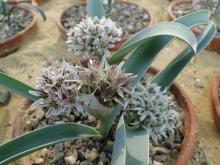 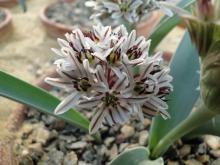 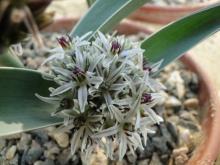 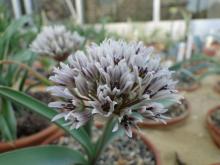 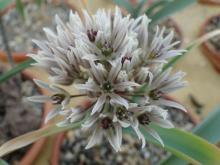 I'm always amazed by how many desirable Central Asian species there are, but so darned few in general cultivation.  I wonder why that is?  Do these make viable seed for you?  Your first photo of the potful of A. elburzense shows more than just a little variation, a most educational look at just how variable plants can be from a seed lot... I like em all.  Before you followed with photos of A. elburzense, I was going to suggest that your unknown Allium from Ahar-Tabriz (Iran) looks like A. elburzense, in fact, I still think so.

The long narrow-tepaled A. breviscapum and wide-headed A. noeanum are also rock garden gems, thanks for potraying these beauties with such fine photos.

I sowed a bunch of Allium seed last year and the year before, directly out in the garden in marked locations, of various Pilous seed and some K.Vickery seed. Checking them this past weekend, most show germination and a few showing small 2nd year leaves.  Also in summer of 2010, I received seed of dozens of Allium species from Kazakhstan; many are showing strong germination this past weekend as well.  I plan on showing photos in 5-6 years ;D

A miscellany of Alliums come to mind as the season starts up.

Allium victorialis is surging into growth.  I grow three forms, an unnamed type, and two cultivars, A. victorialis 'Cantabria' (upright growing but more slender and smaller growing than the next) and A. victorialis 'Kemerovo' with is a large-growing upright form with beautiful fresh pleated leaves in spring.

A. victorialis 'Cantabria' left, 'Kemerovo' on the right. 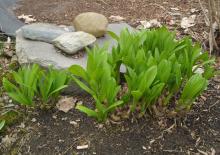 A. victorialis - closeup views showing the burlap-like reticulated bulb coats; the bulbs sitting at and above the soil level. 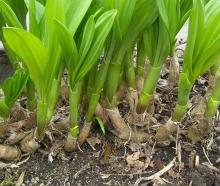 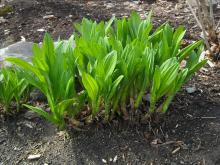 Allium nutans - variegated.  I received seedlings from Jim Jones in my hometown of Lexington Massachusetts, of a variegated form of Allium nutans.  The seedlings varied from all green, to those showing some variegation, to one that was strongly white-leaved with green stripes.  The latter eventually died, but here's a view of a strong growing one that shows some good variegation.  The flowers are pale lilac and not so good, a work in progress. Allium schoenoprasum 'Curly Mauve' is one of my selections; I really like the strongly prostrate curling spring growth.  On the right you can see a seedling plant that is larger in growth... tending towards the same prostrate foliage emergence. Allium species received as A. altissimum from Arnis Seisums, E Kopet-Dag, Turkmenistan, the giant of the genus growing to 5-1/2' tall.  Dr. Reinhard Fritsch believes it is actually A. stipitatum.  Either way, it is a highly ornamental tall allium that is a good doer in the garden, the photo showing that the bulbs split and increase; I really should dig it up and separate the bulbs this summer.  I like the look of the emerging shoots. 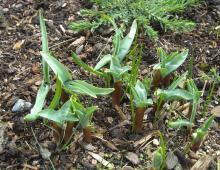 Just like to say that that I really enjoyed your NARGS article, Mark ....bedtime reading the last few nights! Particularly like Green Eyes and Wall of Pink....just wish they were available over here... Same applies to Curly Mauve (above). Victorialis is also a favourite and I'll post something about that one soon myself. If you ever get seed off that variegated nutans, would love to try it... :)

Here's one of my spring favourites, Asian Allium carolinianum photographed a couple of days ago:

MarkHow many species of allium do you grow? The list seems endless.I'll have to think twice, before asking how many varieties and hybrids there are.

A. victorialis 'Cantabria' left, 'Kemerovo' on the right.[attachthumb=1]

Are your Cantabria and Kemerovo reversed? The picture further down should be Kemerovo if it's right?

Thought I'd show you my Victory Onions as they are today. I have about 10 different accessions, but most are still small. Here's a picture of each of the ones that are a decent size:

1) Received as var platyphyllum (from Japan) - very early and much further advanced than the other two. 2) Allium ochotense (synonym) also from Asia3) Allium victorialis (Norwegian naturalised population from the Lofoten Islands)

I've notice also that an accession from Kola (NW Arctic Russia) is also way ahead of the others. Love the Iranian Alliums Luc - they seem a distinctive bunch. Allium breviscapum is such a looker! I'm just getting into Alliums after editing Mark's first (and upcoming second article for the Quarterly). So my main choice from the seed exchange had some alliums and now the ones from the surplus seed ex as well. Have to go and see what is happening - been away at the International Rock Garden Conference and then had a visitor so only just getting straight.