A hearty welcome to the NARGS Forum Stephen; I was hoping you'd find you way over here to our little onion patch. ;D

Regarding ramps (A. tricoccum), I don't think I'm trying hard enough, just allowing a single bulb to languish unattended for a decade under the bone dry shade of sugar maple trees; not a fair assessment of its fitness for the garden.  The species is native here in Massachusetts and nearly the entire eastern half of North America, so surely it can't be that hard to grow, more a matter of finding the right sort of spot for it; probably needing humus-rich soil, reasonable spring moisture, and a summer rest.  Good to know seed might require 2 years to germinate, I may have given up on ungerminated seed pots too soon.

On A. vavilovii, the paucity of verifiable images of this species is testament to the fact the true species is rare in ornamental horticulture, usually replaced by one of the more common onions in Section Cepa, such as A. fistulosum, or A. cepa itself.

Stephen, after my 40+ years of cultivating N. American alliums like A. cernuum and A. stellatum, you have inspired me to actually try eating some this year; my wife is doing up some good stir-fry these days, and I imagine the blood red bulb-coat forms of A. cernuum would be visually pleasing and tasty too.

Thanks for the welcome, Mark.

Good to hear that you're now using as well as knowing your onions! I've always thought that The Onion Man need never go hungry (even if times get really bad)! What inspired me to try Allium cernuum years ago was getting a copy of Sturtevant’s Edible Plants of the World (in Seattle)  and reading that Allium cernuum and A. canadense had formed almost the entire source of food to the French Missionary (Jacques) Marquette and his party from Green Bay to the present site of Chicago in 1674! Fittingly, there’s a park in Chicago called Marquette Park (named after Pere Marquette) and a remnant of the original prairie on which Chicago was built and thrives there thanks to volunteers, with Allium cernuum one of the original plants…..Of course, Chicago simply means onion, so if you fancy a change you could just call yourself The Chicago Man!  Link to the Sturtevant text: http://www.henriettesherbal.com/eclectic/sturtevant/allium.html

Hello, Stephen!  That's a very colorful and scrumptious looking salad.  I wonder if you are the first to have food as an avatar...Care to elaborate on its ingredients?   Do I see daylily flowers?

I have eaten Allium stellatum (bulbs), the more common native onion species here in Minnesota.  The species (and A. cernuum) were eaten by all the Native American tribes that lived here.  I wonder if there is a difference, tastily speaking, between stellatum and cernuum.  Have you tried them both, Stephen?

The origin of the name "Chicago" is Native American, and is thought to refer to A. tricoccum, the "smelly onion" that was abundant there.

The few wild ramps that reside close to me are in maple/oak forest, and in areas that definitely go dry in summer.  In fact, they sit up on a hill adjacent to a small lake, not down near the bottom where it is more moist all season.

Stellatum: I’ve grown an imposter for many years. Hopefully I will have the real thing this year, thanks to Mark (I think)....

Tricoccum: That makes sense as I have usually been sent seed mid-winter, so wouldn’t germinate until the second year.

Chicago: I’d heard of various candidate species: cernuum, canadense and tricoccum. However, this article seems to suggest we’re both wrong (can’t see the end of the article thought): http://www.jstor.org/pss/40192527Haven’t time to check more.... Anyone know what current thinking is?

The birchbark makes a nice background to the photo, Mark!

Don't you have a word for birchbark? In Norwegian it is called "never"  ;D and was used for many things, roofs, cups, boxes etc.

Stephen it is not you first but second post! And I knew you eat such green stuff ;D I do it myself; every year I get a present from a lady I know and that is Allium ursinum butter!

The salad (you did ask!): one of my less diverse efforts with a mere 77 varieties (and 61 species).

And not boring at all!(I wonder if Wim's R. ficaria 'Salad Bowl' - wait, just read your other post: not the flowers!)

The birchbark makes a nice background to the photo, Mark!

Don't you have a word for birchbark? In Norwegian it is called "never"  ;D and was used for many things, roofs, cups, boxes etc. 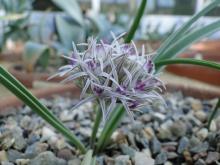 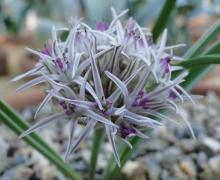 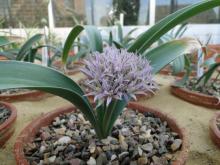 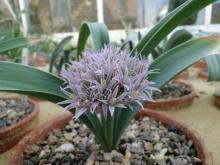 Mark, you know I have now and then an allium species without ID.What do you think of this one ? 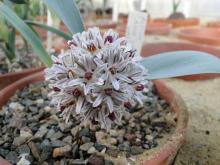 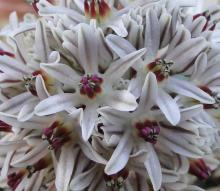