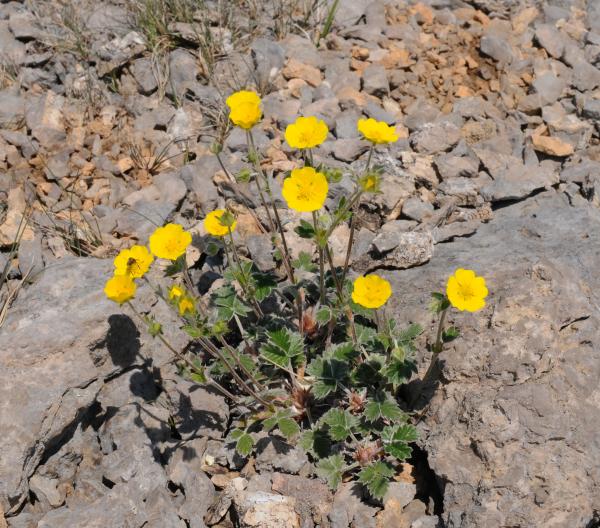 There are several distinct populations of Potentilla nivea, also known as snow cinquefoil. Each population is divided primarily based on the degree of hairiness. One population is distributed among limestone rocky ridges, scree and crevices in the mountains of western North America, Alaska south to New Mexico. An Atlantic population is distributed among limestone outcrops from Newfoundland, north to Baffin Island, Greenland and across Scandinavia. Other populations occur across northern Eurasia. Overall plants form low tufts, under 10 centimeters, with very hairy, silvery, trifoliate leaves. Flower stems arise 5-30 centimeters, forming loose clusters of 1 centimeter diameter yellow flowers. In the wild, the normal blooming season is June and July.

This species requires well-drained, preferably limestone-based soil, in full sun. It is an ideal subject for a trough or crevice garden. Hardy to zone 2 but not suggested south of zone 6.

May in the south but June to July in the north.

Seed is the only practical way to propagate this Potentilla. Seeds require 8 weeks of stratification. Best results are to sow in the fall and leave outside for the winter.