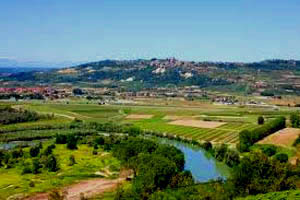 Arguably the Piedmont Chapter has the most trying conditions for rock gardeners.  (Or do all NARGS chapters believe the same about their areas?)  Our soil is red clay, not very well-drained, generally acidic to circumneutral.  Survivability of many plants is improved by amending the soil, often with Permatill, an expanded slate gravel.  Average annual precipitation is 43”, generally evenly distributed throughout the year.  Our climate is hot and humid in the summer, with average highs around 90 and lows of 70; the record high is 105.  What is so significant about rock gardening in the South is the hot summer nights (sometimes not dropping below 70 F), causing plants to metabolize much of the sugars produced during the day. Another factor is that hot summer nights coupled with moist conditions, without good drainage, can cause mold, fungus, and bacteria to grow and damage plants, particularly in July and August. Most summer rain comes from thunderstorms, with occasional dry spells and droughts.  Tropical storms and even weakened hurricanes can affect the area with high winds and heavy rains.  Hail is infrequent and not typically of a large size.  Tornadoes are generally rare and not particularly strong, at least by Midwestern standards.

In mid-winter the average high temperature is 50, with a minimum of 30.  Daily temperatures can easily deviate from these averages by ten, or occasionally even twenty degrees.  The record low was -9 degrees, killing many plants previously considered to be hardy.  Annual snowfall is about 7”; the greatest single snowfall was twenty inches.  Ice storms occasionally inflict considerable damage on plants and other property.  Spring frosts and freezes occurring after plant growth has begun can also burn tender foliage.

Rock Garden Plants for the Southeast

Iris cristata (and other small Iris)