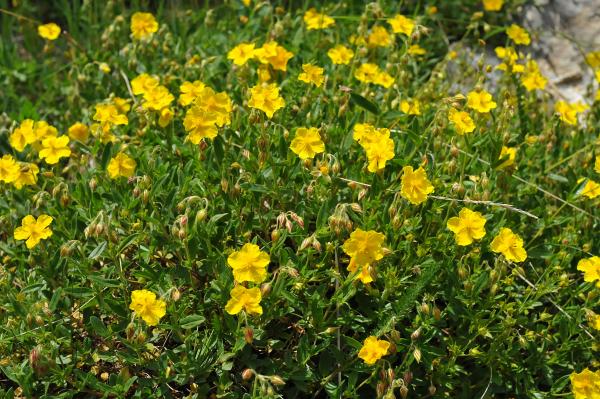 Common rock-rose, Helianthemum nummularium, is native to rocky limestone areas throughout much of Europe.  Plants are evergreen with small elliptical leaves and trailing, somewhat woody stems.  It can reach 20-30 cm tall but spread up to a meter across.  Flowers are produced in loose clusters from late spring through early summer.  Each flower has five yellow petals, often orange towards their base.  The flowers are up to 2.5 cm in diameter.  There are many named cultivars in shades of yellow, orange, red, pink and white. While individual flowers only last a day, plants are very prolific bloomers.

Rock-rose are sun lovers and prefer lime-rich soil.  The soil must be well-drained as they are prone to winter rot if the soil is too wet. While hardy to zone 5, they dislike hot, humid summers. They are very prone to wind-burn in winter so placing an evergreen bough over the plants in late fall is recommended. Once established, they are surprisingly drought-tolerant.

May in the south to July in the north.

Named cultivars must be reproduced by cuttings. Non-flowering shoots may be taken as soft-wood cuttings in mid to late-summer. They generally root quite easily.  The species may also be grown from seed, but germination can be prolonged.  They usually germinate best of sown at 20 C for three months, followed by a winter stratification for 3 months.