Plant of the Month for December 2011 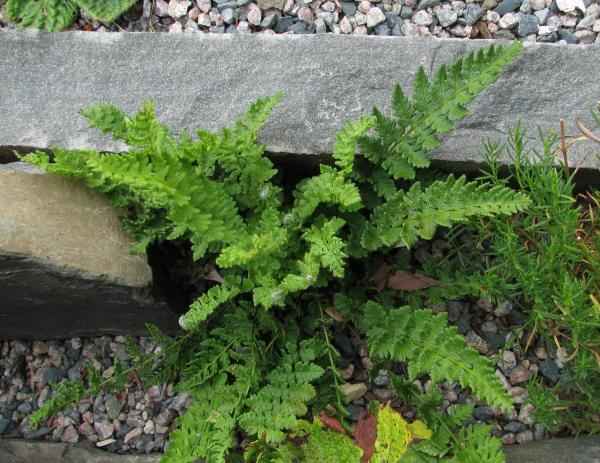 The genus Woodsia was established in 1810 by Robert Brown, who named it named after the English botanist Joseph Woods. Woodsia ilvensis is also known as the oblong woodsia, rusty woodsia or rusty cliff fern. It has a circumpolar distribution. It is the most commonWoodsia species in North America even though it is considered threatened or endangered in the states of Illinois, Iowa, and Maryland.

In the wild, this fern grows on sunny cliffs or rocky slopes, usually on thin, acidic soil. If forms a tufted clump of narrow fronds that may reach 15 cm (6"). The undersides are distinctly hairy, white on new fronds but rusty-orange on older. The fronds are deciduous and die-back in winter.

In northern regions, this fern can be grown in full sun as long as the soil remains reasonably moist. Drought conditions may cause the plant to go summer dormant. In hotter regions, shade from mid-day sun may be advised. They prefer organic, acidic soil that is well-drained. They are lovely subjects for a trough or within a narrow crack in a crevice-style garden.

Spores are released throughout the growing season. To collect them, pluck a frond and place it hairy-side down on a piece of white paper. If the spores are ripe, they will produce a dust-like reddish-brown coating on the paper within a day or two. These may then be used for sowing. Ferns are slow to become recognizable plants so you will probably need to keep the plants indoors for their first winter.

Surface sow (very thinly) on sterilized pre-dampened Promix or peat-based media. Keep the soil wet (bottom water) and cover the pot with glass or plastic to create 100% humidity. Keep them in bright shade or under florescent lights . Within a few weeks, green prothallus (mossy-looking) will be evident. Spritz these regularly. If all goes well, within a month or two the first small fronds will become evident. Keep plantlets moist until they produce 2-3 fronds. At this stage they may be potted individually and grown on under bright shade and reasonable humidity (they don't need 100% at this stage). By mid-summer they should be large enough to plant out. For more details on growing ferns from spores, check the link below.

Multi-crown plants may be dug in early spring and divided into smaller divisions. If kept moist, they can be carefully divided anytime during the growing season, keeping in mind that the fronds can be fragile.