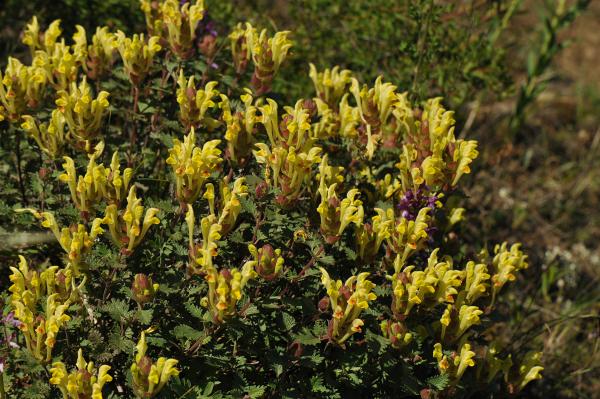 Commonly called the yellow skullcap, Scutellaria orientalis is a woody based, creeping perennial 10-30 cm tall. The soft, grey-green foliage is pinnate. The tubular, hooded, 3 cm long flowers are bright yellow, sometimes with hints of red on the lip. They are produced in terminal clusters held just above the foliage. Scutellaria pinnatifida is a synonym name. It grows in gravelly, limestone-based soils in Spain, Greece, Turkey, the Crimea area, the Caucasus Mountains of Georgia and Russia and east to western China. There are 11 subspecies of which alpina, pectinata, and pinnatifda are the most commonly encountered in cultivation.

This species needs full sun and a well-drained soil that is on the alkaline side. It does well in large troughs. It is reasonably drought-tolerant once established. Excess winter wet can be detrimental. Hardy to zone 4.

April in more southern areas to as late as August in northern areas.

Cuttings taken in mid-summer generally root within a few weeks.

Large mats may be dug and cut into sections just after flowering.