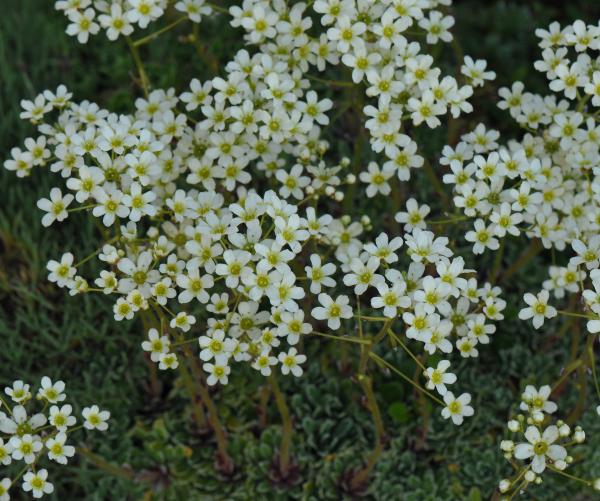 This encrusted saxifrage has the widest distribution of any saxifrage, being found across the northern hemishere.  It mostly commonly grows on limestone substrates. Being so widely distributed, there are several subspecies which vary slightly in the shape of their leaves, arrangement of the blossoms as well as the degree of red spots on the petals. Regardless to the subspecies, plants generally produce multiple rosettes that range from 1-9 cm in diameter.  Plants usually produce low mounding cushions. The leaves are stiff and silvery, with serrated margins.  Leaves are generally curved upwards and inwards. The flower stems arise 5-40 cm and produce a small panicle of white 1 cm diameter flowers.  The flowers may be white, creamy, pale yellow to pale pink, with variable amounts of fine red spotting.  The branches of the panicles usually have only 1-3 flowers, a feature that can help seperate it from other similar encrusted saxifrage species which usually have 5-12 flowers per branch.  The flowering stem and branches are usually glandular and sticky to the touch. There are many named selections and it freely hybridizes with other similar species.

This is among the easiest excrusted saxifrages to cultivate.  Provide full sun in cooler, northern areas or afternoon shade in warmer regions. The soil should be gritty, well-drained, not too dry and preferably on the alkaline side as this species normally grows on limestone.  It is ideal for crevice gardens and is a number one plant for troughs. In the open rock garden, they appreciate being planted against a rock. Very hardy to zone 2 but does not like high heat and humidity.

May in more southern regions to July in the north.

This species may be propagated by division of large clumps in early spring or after flowering.  Individual non-flowering rosettes may also be taken just after blooming and rooted in a shady frame.  Pure sand or a mix of sand and peat will work. It is also easily raised from seeds which require 8-10 weeks of temperatures below 4 C to break dormancy.  Seeds may be sown in the fall and left outside for the winter, where they will germinate the following spring.  They are slow from seed so early stratification followed by germination in a greenhouse can lessen the time from seeding to blooming.