Plant of the Month for August 2019 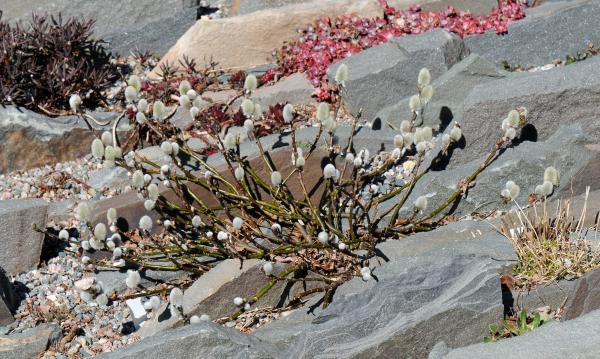 This dwarf willow is primarily native to the eastern Arctic, as far south as the limestone barrens of Newfoundland.  It also has disjunct populations in the Rockies of Alberta and Colorado.  Plants are mostly prostrate but occasionally may reach to 1 m.  The catkins are quite large for the size of plant, reaching up to 4 cm long.  It blooms before its leafs.  The leaves are ovate to heart-shaped; somewhat shiny green above but pale and glaucous beneath.  In the wild it grows almost exclusively on limestone substrates.

This dwarf willow prefers full sun but will tolerate part shade.  The soil should be reasonably well-drained but still moisture retentive.  It will not tolerate drought.  It has a preference for neutral to slightly alkaline soil.  Hardy zone 2-7 but dislikes hot baking sun. It performs best in the north and in cooler coastal regions.

March in the south, May to June in the north.  This species produces catkins before it leafs.

Seeds have a sgort viability so must be sown within a few days of release.  If fresh, seeds will germinate within 2 weeks.