Plant of the Month for November 2017 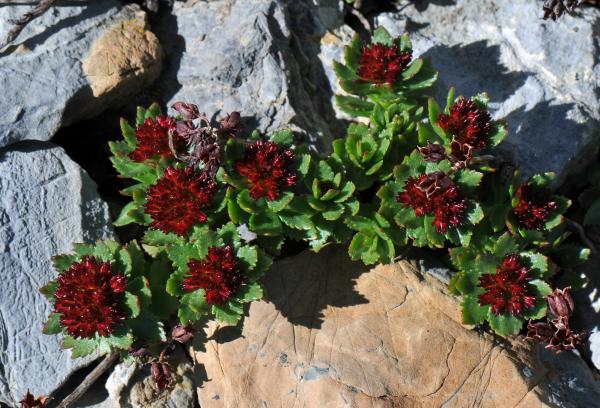 Rhodiola integrifolia is considered by some taxonomists to be R. rosea ssp. integrifolia.  It is commonly known as western roseroot, ledge stonecrop or king's-crown. It is native to the mountains of western North America, from California and New Mexico north to Alaska and the Canadian Yukon where it grows on subalpine and alpine meadows, cliffs and scree slopes, commonly on limestone.  It also extends into NE Russia, on the Kamchatka Peninsula.

Plants form a clump of several unbranched stems that arise from a thick rootstock. The stems reach to 30 cm, with numerous narrow, fleshy, bright green to grey-green leaves.  The plants are dioecious with separate male and female plants.  The orange, red to purple star-shaped flowers are produced in flat-topped clusters during June and July.

This sun-loving plant is easily cultivated in any well-drained soil.  It does well in soil that is slightly acidic, neutral to slightly alkaline. Rated hardy to zone 2.

Unlike most sedums, this species does not root readily from stem cuttings unless a portion of the thickened root is attached.

Larger clumps may be dug and divided after flowering.