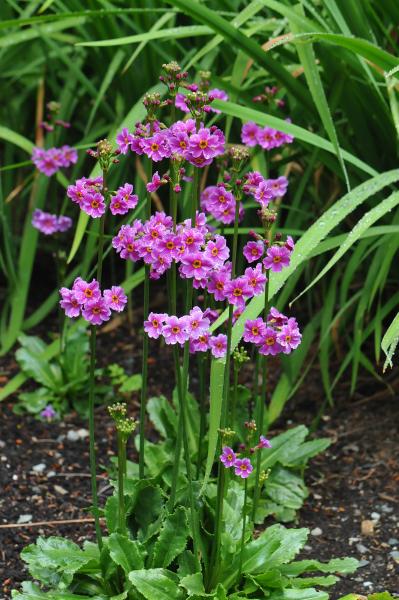 This primrose is part of the candelabra section which includes P. japonica, P. bulleyana and P. pulverulenta. Like most members from this group, it is a species that prefers boggy meadows.  Primula poissonii is native to southwestern Sichuan and western Yunnan, where it grows at elevations of 2800-3400 m.  Unlike the more popular members of this section, P. poissonii has semi-evergreen rosettes.  Flower stems arise to 45 cm and produce several whorls of 2-3 centimeter diameter, magenta-pink to carmine, yellow-eyed, fragrant flowers.  In the wild it blooms June to August.  It was first discovered by Delavay in 1882.

This primrose is best grown in a bog garden or at least, highly organic soil that never dries completely.  Position them in full sun to part shade.  The soil should be on the acidic side.

This primrose is among the later-flowering types, blooming in June is more southern locations to as late as August in northern regions.  It is highly recommended for extending the primrose season. It is hardy in zones 5-8.

Propagation by seed is generally easy.  Sow at 20 C and germination will commence in 3-6 weeks.  Larger established clumps with multiple rosettes may be dug in early spring or after flowering, with plant divided into single rosettes.