Plant of the Month for October 2017 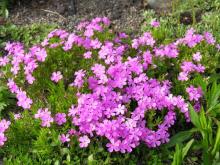 Phlox borealis is more correctly named P. siberica ssp. borealis but is so well known under the old name, it will be described here as such.  Commonly called Arctic phlox, this species is native to northern Alaska where it grows on gritty but humus-rich slopes.  The overall plant habit is very similar to moss phlox but more tufted, reaching 5-8 cm tall. The evergreen leaves are needle-like; bright pink flowers are solitary or paired, produced from April in the south to June in the north.

This phlox requires full sun and humusy, well-drained soil to which plenty of grit of course sand has been added. It can tolerate some drought once established. Hardy zones 2-8, but is not fond of heat and humidity. It has few pests or diseases.

Seeds require a stratification period of 8 weeks at 4 C before germination will occur.

8-10 cm cuttings taken in July generally root in a few weeks.  This is by far the most common form of propagation.

Larger mats may be dug and broken into smaller portions in July.