Plant of the Month for February 2010 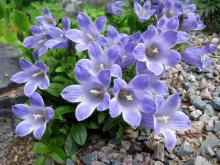 This bellflower is native from Japan north through eastern Siberia, along the Aleutians and into northwestern Alaska. Plants spread by underground stolons, eventually forming a mat. The foliage is glossy bright green.

The relatively large, solitary flowers are held atop 5-10 cm stems from May through June. In Newfoundland, we often get sporatic blooming all summer and into autumn. Blooms are mid-blue with paler centers. Plants are hardy from zone 3-8.

Full sun to part shade in any well-drained soil seems to suit this care-free yet highly desirable bellflower.

May in the south, June in the north and often scattered blooms later in the season.

Plants are easily increased by digging and dividing the mass of underground stolons. This is best done in early spring or late summer.

Rosettes with a short piece of stolon attached may be taken in July-August and rooted in a shaded frame.