Plant of the Month for August 2015 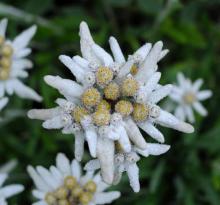 Leontopodium alpinum, commonly known as edelweiss, is native to the mountains of southeastern and south-central Europe. Its distribution ranges from the Pyrenees to the Alps and eastwards over the peninsula of the Balkans to the central Balkans in Bulgaria, where it is found between 1,500-3,400 m asl.  It is confined to limestone substrates.  The genus name comes from Greek and translates as "lion's paw".  Edelweiss is the national symbol for Austria and Switzerland. This common German name translates to "noble white", a reference to the flowers which were highly cherished in parts of southern Europe.

The plant may reach to 30 cm in cultivation but is often less in the wild.  Plants form a clump of many rosettes. Its narrow leaves, flower stems and especially the flowers, are covered in dense hairs, an adaptation to cold, arid-conditions and ultraviolet protection.  Each bloom consists of five to six small yellow florets surrounded by fuzzy white "petals" (technically they are bracts) in a double star formation. In the wild, the flowers bloom between July and September.

Edelweiss is apt to be short-lived in most warmer regions as they dislike heat and humidity, but they are easily raised from seed.  They are hardy from zone 4-7.  While they prefer limestone in the wild, in cultivation, they are not fussy about the soil pH.  They require full sun and well-drained soil.

As early as June is southern areas, to September in the north.

Seeds may be sown at 20 C and should germinate in a few weeks.  They do not require a stratification period.

If grown in cooler regions, edelweiss can form a sizable clump which may be dug in early spring or early fall, and divided into smaller pieces.  In warmer regions plants rarely reach a divisible size before they expire.