Plant of the Month for August 2009 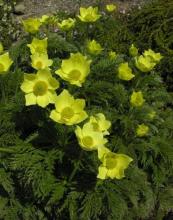 Pulsatilla alpina is native to the mountians of south-central Europe, from Spain to Croatia, growing at an elevation of 1200-2700 m. It is one of the largest members of the genus, reaching upwards to 45 cm if growing under ideal conditions. Compared to other Pulsatilla, they are relatively late to appear in spring. Consequently, they are relatively late to bloom as well, several weeks after the common Pulsatilla vulgaris. The flowers are held erect, an unusual feature in a genus whose flowers are typically nodding. The normal species has white flowers with a blue flush on the reverse, but subspecies apiifolia, has sulphur-yellow blooms. Typical of the genus, the seedheads are quite decorative and in the case of P. alpina, quite large.

While most members of the genus Pulsatilla naturally grow upon limestone substrates, P. alpina ssp. apiifolia prefers siliceous rocks, therefore, more acidic soil. The growing media should be well drained but reasonably moist. An organic-rich yet gritty mix is ideal. Full sun is a must and plants should be placed where they will remain, at an early age since they resent transplanting.

In northern areas, this species blooms throughout June but in more southern regions, April through May would be more typical

Fresh seed germinates better than old. They require a stratification period of several weeks (personally I give them at least 8 weeks). Removal of the 'tails' seems to improve germination. They are also known to respond to GA treatment before sowing. I have had reasonable success when sowing seeds in August and leaving them outdoors for the winter.

Not generally practiced as plants have a taproot.