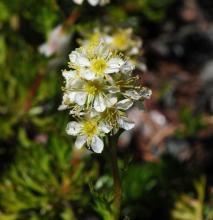 Plants form low semi-woody mats.  The foliage is mostly evergreen and very dissected, appearing almost feathery.  The flowers are produced in a dense spike up to 15 cm high.  Individual flowers are creamy-white with five petals and up to 20 stamens.  It is a member of the Saxifrage Family.

Luetkia performs best in full sun but can tolerate part-shade, especially in warmer regions.  They are not fussy about the soil pH but do prefer soil that stays reasonably moist.

In the wild, they may be found in bloom from June through September

Luetkia seeds require a stratification period of at least 8 weeks.

Not generally practiced although large mats can be cut into smaller portions.

This species naturally reproduces by rooting of its creeping stems.  As a result, cuttings 10-15 cm long are easily rooted anytime from late spring through mid-summer.