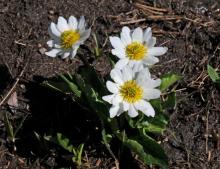 White marsh marigold, Caltha leptosepala, is native to alpine regions of western North America, from Alaska south to New Mexico, growing at elevations of 750m to 3900m.  In the wild, they often grow at the edges of summer snow-beds where they inhabit wet alpine marshes and seepages.

This species has two subspecies.  The subspecies leptosepala is the most wide-spread, from Alaska to New Mexico, primarily in the eastern and central Rockies.  It has one to four flowers per stem and leaves that are wider-than-broad. The subspecies biflora (sometimes incorrectly called Caltha biflora or C. howellii), is found along the coastal range of California north to coastal Alaska.  This subspecies has two flowers per stem and broader-than-long leaves.

Plants reach 20 centimeters and form a low clump of round, smooth, shiny leaves. Flowers vary in size from two to four centimeters in diameter.  Each blossom has 8-20 narrow, white, petaloid sepals that surround a central cluster of bright yellow stamens and pistils.

Caltha leptosepala requires consistently moist, organic-rich soil making them challenging to grow.  Even under moist soil conditions, plants may go dormant by mid-late summer.  They are hardy from zone 3-8.

April to June in cultivation but generally June to August in the wild.

Fresh seed germinate best and if sown at 20 C, should germinate within a few weeks.  Older seed may be coaxed into germination by treating with GA or by stratifying them for 8-12 weeks.

Larger plants may be dug and divided after blooming.