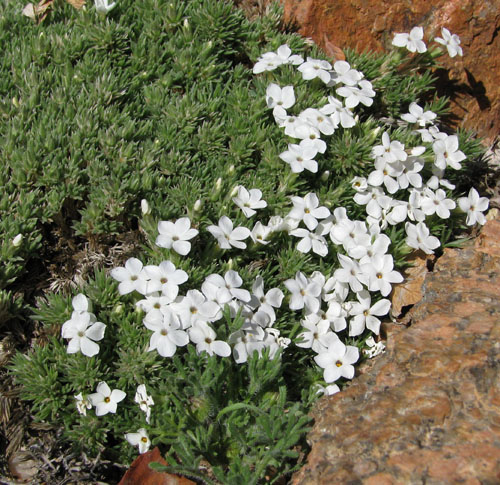 Phlox condensata forms a dense cushion of evergreen foliage. Numerous, nearly stemless white to pale mauve flowers are produced individually or in pairs. In the wild, it occurs on high mountain slopes, screes, fell-fields and rocky ledges, generally on limestone substrates. Elevations range from 6100-14,000 feet depending on the mountain range it inhabits. While frozen for many months, the strong winds of their natural haunts prevent the accumulation of much snow. Essentially, it grows in very xeric alpine environments.

This species requires full sun and sharply drained medium that is alkaline in nature. Winter-wet must be avoided. This is a challenging species to grow outside of its naturally-occuring region. In wetter areas, an alpine house is almost essential.

In the wild, this species blooms in July and August. In cultivation at lower elevations, blooming may commence in April.

Seeds require a stratification period of about 3 months at 4 C before exposing them to gentle heat.

As plants have just a single main stem, division is not practiced.

Tip-cuttings 2-5 cm long may be taken after blooming and rooted in sharp sand.