Plant of the Month for January 2018 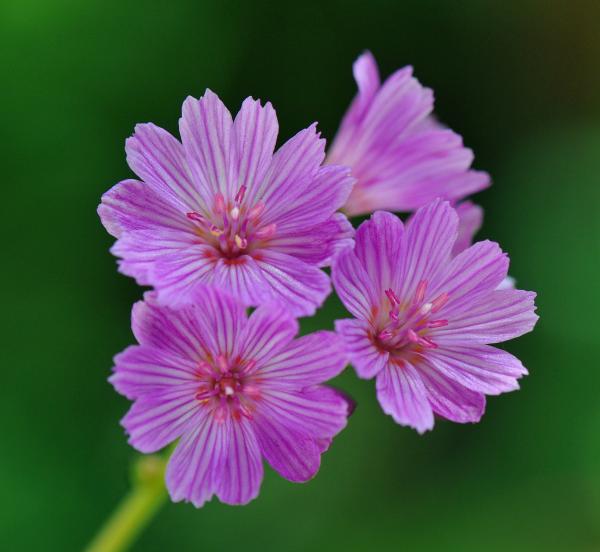 The Columbian lewisia has three distinct varieties. The variety rupicola is native to rocky cliffs and slopes of British Columbia, Oregon and Washington at elevations of 800-1700 m.  It is distinguished by its 12-13 mm long petals and leafless flower stems. Their evergreen, fleshy leaves are linear and usually 2-3 cm long. Their flowers are commonly magenta-pink but BC populations are often very pale pink.

The variety columbiana is also native to the same regions but occurs at elevations of 500-2300 m. Its leaves are narrow oblanceolate and 2-10 cm long (generally longest-leaved of the three varieties). They have bract-like cauline leaves and their flower petals are usually 7-11 mm long. Flowers may be pale pink to magenta-pink.

The variety wallowensis occurs in Idaho, Montana, Oregon and Washington, at elevations of 1600-2700 m.  Its narrow oblanceolate leaves are 2-4 cm long. It also has bract-like cauline leaves but the petals are 5-8 mm long and white with darker pink veins.

This lewisia species requires full sun and well-drained soil, especially in winter, as they are very susceptible to rot in winter. It is very drought-tolerant, tapping into the moisture stored in their fleshy leaves. It is rated hardy to zone 4.

In the wild, populations bloom from late May to August. In cultivation, warmer growing areas may see blooms in late April while northern areas often see blooms in July.

According to the Ontario Rock Garden and Hardy Plant Society seed germination guide, sow seeds at 20 C for 6 weeks, then drop to 4 C for 6 weeks then raise temperature to 10 C for 6 weeks.

As the plant is tap-rooted, division is not practical.

Individual rosettes may be separated after flowering. Let the cut ends dry for a few hours then simply press them into a well-drained mix where they will root within a few weeks.