Plant of the Month for February 2011 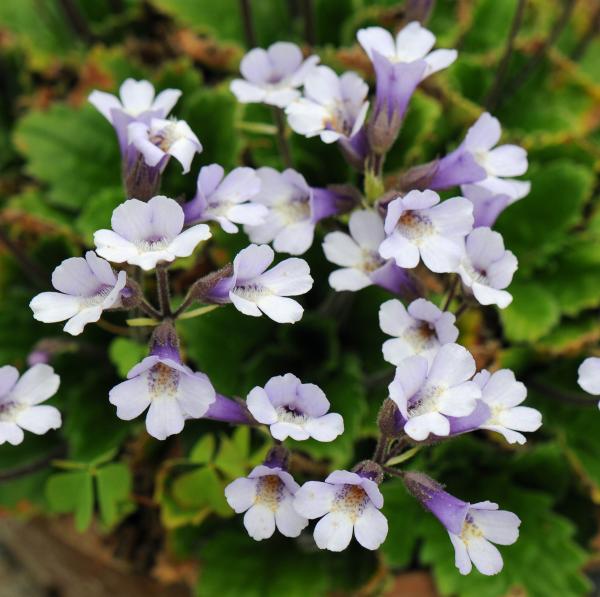 Haberlea rhodopensis is a member of the Gesneriaceae. This hardy 'African Violet' relative shares its fame among alpine growers with Ramonda and Jankea. Haberlea is found in the mountains of southern and central Bulgaria (Stara Planina Mountains and Rhodope Mountains) and NE Greece (Pangeon and Falakron Mountains), where they grow among shady limestone crevices an elevation of 600-1700m. It was first described in 1835. It is often sold under the synonymous name of Haberlea ferdinandi-coburgi.

Plants form evergreen rosettes with variably hairy leaves. The lavender flowers arise on 10 cm stems from the leaf axils. This plant is sometimes called the 'ressurection plant' as they can loose up to 90% of their moisture content yet still survive. The leaves may show severe damage if allowed to dry to this extreme, but the central crown will survive and flush new leaves once moisture levels increase.

Plants dislike water sitting in their crowns, especially in winter, so planting on a slope or even vertically in rock cracks, suits them best. Position them in part shade. The soil should be humusy, well-drained and alkaline in nature. They are hardy to USDA zone 4. They are perfect pot plants for alpine house conditions.

April in the milder regions of North America and as late as June-early July in cooler, northern regions.

Seed are dust-like and should be surface sown on a damp, sterile media which is never allowed to dry out. Thin plants as soon as large enough to handle but they often do best if allowed to stay in their germination pots for at least one year. Do not expose them to full sun; fluorescent lights are ideal.

Large multi-rosetted specimens can be divided after flowering, in a similar manner to dividing large African violets. Haberlea also respond favourably to in vitro propagation although this would not be a standard practice for most alpine enthusiasts!

Plants may be propagated from leaf cuttings taken in mid-summer and treated in a simiar fashion to rooting African violets.