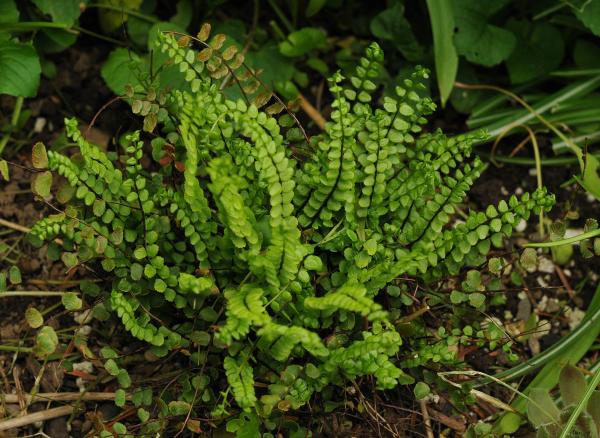 Ebony spleenwort, Asplenium trichomanes, is among the most widespread fern in the world.  It is distributed across the holarctic, extending south in mountainous areas, into South America, Africa, Indonesia as well as Hawaii, SE Australia, Tasmania and New Zealand.  Although widespread, it can be very localized throughout much of its range.  This fern is a chasmophyte, growing in cracks and crevices.  With such a wide range, there are several subspecies.  The rock type preferred is dependent on the subspecies.  Those from the northern hemisphere occur primarily on limestone.  It most commonly occurs on east-facing or north-facing aspects.

Plants have a tufted form, with narrow, evergreen fronds 10-30 centimeters long.  The pinnae are rounded and the stalk nearly black, the derivation of the common name "ebony" spleenwort.

This dwarf fern is among the most popular for growing in shady rock and crevice garden situations.  It is very hardy, growing as cold as zone 2. While evergreen, it is easily damaged by exposure to cold winter winds.  In northern areas of the wild, it is usually protected within rock cracks or has plenty of deep snow for insulation. It can tolerate early morning sun but otherwise should be situated where it is shaded for the rest of the day.  While it often occurs on limestone, in the garden it is tolerant to variable soil pH. It prefers evenly moist soil.  If too dry, it can go summer dormant.  If shaded and kept reasonably moist, it may be grown as far south as zone 8.

Large clumps may be divided at anytime is the growing season although spring when new fronds occur, it the optimal time. Propagation is also possible by spores gathered in late summer.  Spores may be sown in fall indoors and grown over the winter under artificial light or in a bright window.