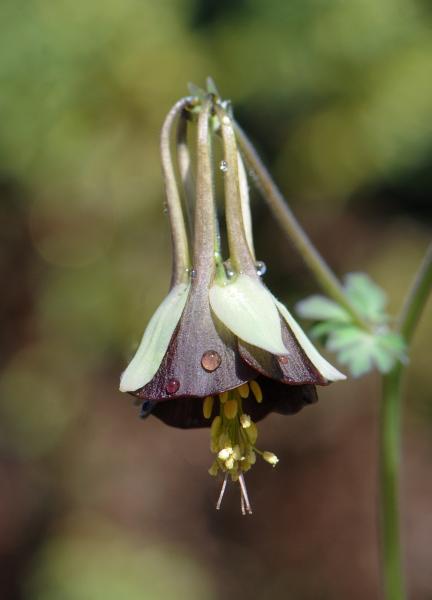 This columbine is among the earliest to bloom and is one of the few that has fragrant flowers. It is native to China, Japan and Siberia growing in forests, grassy slopes and streamsides at elevations of 200-2400 m. The bi to tri-ternate foliage is often purple or brown tinted when it first emerges in spring. The foliage forms a mound to about 20 cm. Flower stems arise 30-50 cm, topped by several nodding, 2 cm diameter flowers. The flowers have an unusual colour for columbines. The sepals are pale green with a purple tint. The petals are chocolate brown. On the variety atropurpurea, the sepals are grey-purple while the petals are maroon. In the wild, it blooms May to July. 'Chocolate Soldier' is a popular cultivar but does not look much different than the species.

This species will grow well in full sun or part shade. It prefers soil that is well-drained but retains some moisture.  It will not tolerate excessive drought nor excessive winter wet. It is not particular about the soil pH. Like all columbines, it is tap-rooted and generally dislikes being transplanted.  It can be short-lived but often seeds-about if given the chance.  It generally blooms before other columbines so it usually sets true seed. Hardy to zone 3.

In cultivation, this columbine blooms in April in milder areas to as late as early June in the north.

This species is generally raised by seed.  Seed are best surface sown and kept at 20 C where they will germinate within a few weeks.  Being tap-rooted, it is not propagated by division nor is is propagated by cuttings.