Don't forget the red ones!

Jane: you have GOT to be kidding me: you have grown Anemone coronaria in THE BLUE RIVER VALLEY? That's amazing.

I guess I should start planting out coconut palms in Denver then!

Anemone coronaria is a lot hardier than one would think.  I have had them winter over here in zone 3, although they never amounted to much in the second year (foliage, no flowers).

The latest red flowers in the Rock Garden, Rhodophiala bifida, 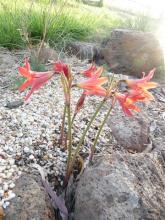 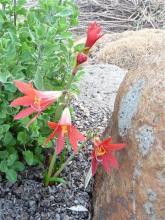 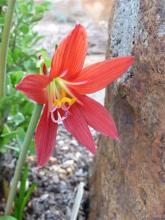 The latest red flowers in the Rock Garden, Rhodophiala bifida,cheersfermi

Very nice Fermi, I would love to have Rhodophiala blooming in my garden!

Color is certainly subjective.  I find it interesting in the Flora of China, not sure if it is a translation issue or not, that pink flower color is invariably listed as "pale red". Going back to Antennaria, for most of the deeper color forms of A. rosea and A. dioica (including the nice one you show Trond) I would call them pink; a nice bright or rich pink, but definitely pink.  There are some selections that, repeating my previous characterization, "approach" red.

I think the genus Penstemon has some interesting cases, such as with the shrubby Dasanthera species, where flower color traverses the pink to red spectrum.  I hear people describe the flowers on Penstemon rupicola as red, or "cherry red", but to me they are definitely a rich pink. http://calphotos.berkeley.edu/cgi/img_query?enlarge=0000+0000+0809+1902

Penstemon newberryi has several forms, often the flowers are a rich intense pink, or "rose-red", but there are some true pure red flowered forms.  Bob Nold's book on Penstemon mentions a cultivar of P. newberryi named 'Red Lassen' offered by Siskiyou Rare Plant Nursery; a cherry red selection. I once grew a form of Penstemon newberryi ssp. sonomensis from seed that had amazing blood red flowers, not pink in the slightest.  Googling around, I found another cultivar at Yerba Buena Nursery named Penstemon newberryi sonomensis 'St. Helena'.http://www.yerbabuenanursery.com/viewplant.php?pid=1503http://www.yerbabuenanursery.com/images/new_botimages/large/1503_j.jpg

Mark, Penstemon rupicola even I would call pink (or "rosa"). The P newberri cvs shown are red, as stated.