Issue 5 of International rock Gardener, for May 2010 is now online athttp://www.srgc.org.uk/logs/index.php?log=international

This Aethionema subulatum picture is from Zdenek Zvolanek, it is growing in the "Beauty Slope", the Czech garden of ZZ and Joyce Carruthers. 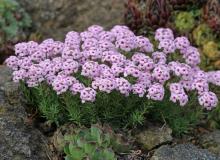 Issue 5 of International rock Gardener, for May 2010 is now online athttp://www.srgc.org.uk/logs/index.php?log=international

This Aethionema subulatum picture is from Zdenek Zvolanek, it is growing in the "Beauty Slope", the Czech garden of ZZ and Joyce Carruthers.

Please be aware NARGS Forum readers, that downloading the latest Issue 5 of the International Rock Garden requires that your free "Adobe Reader" application be updated.  I had version 7.x, which is fairly up-to-date, but the newsletter requires a newer version (the latest version of Adobe Reader is 9.3).  The installation will require the installation of auxiliary software called Adobe DLM (Adobe DownLoad Manager), be sure to unselect the option to install some "promo" virus protection software... retain your own virus protection software... the installation of the Adode Reader upgrade uninstalls the older version and upgrades to the newest version, then requires a computer reboot to initialize the new Adobe Reader version. All this assumes you have administrative access to your computer to perform these updates.  It would be good if future versions of posted International Rock Garden PDF files were "saved as" a prior PDF version to not instigate required upgrades to the latest software, for general lowest common denominator access to the majority of interested users.

Fortunately I had no problem downloading the issue but it is more problematic reading it! Then I don't speak of the language but all the very tempting plants do me sick to have something like that myself! Which I know I can't achieve - not with all, maybe a couple of them.

Trond, it is good that we are tempting you!

Mark, I'm not sure what has changed with this issue which has been saved to the same "standard" as the previous ones.

I'll take technical advice on the matter to see if something has changed here.  :-\

Okay.... I'm told that this  Adobe version we are saving to has been out for over a year and is the one used for the Bulb Log, also.

The option of saving to previous versions of Adobe would mean either we cut the size of the magazine altogether and/or cut the quality of the photo files to enable a reasonable download size of 3 Mb.  Since the Adobe reader is free to download and anyone using a work computer is likely to be using the latest versions, we have not found this to be a problem cited by other readers.

Experimenting here, on a pc, we have found that an upgrade is quite straightforward and did not require a reboot.... so perhaps there is some variation in these things?

The other problem with making something backward compatible is, how far do you go? We are trying to make the best use we can of the facilities available free to access.We are also mindful of download limits for folks, too. Do let us know of others are having problems and we will see if we can help.

Okay.... I'm told that this  Adobe version we are saving to has been out for over a year and is the one used for the Bulb Log, also.

The previous International Rock Gardener PDFs were PDF Version 1.6 (Acrobat 7.x).  The current Issue #5 May 2010 is PDF Version 1.7 (Acrobat 8.x).  When going to a newer release of software, requiring readers to also upgrade their software, possibly hardware too (see below), it is advisable to mention the newer version requirement on the downloads page.

Since the Adobe reader is free to download and anyone using a work computer is likely to be using the latest versions, we have not found this to be a problem cited by other readers.

It is not necessarily straight forward when the upgrade requires...1) an ancillary or adjunct piece of software be installed which is new and unfamiliar to the user (Adobe DLM)... one wonders if it is legimate... 2) one must be diligent about NOT INSTALLING the promo virus-protection software that is bundled or "piggybacked" ontop of the "free" Adobe ancillary software (which could mess with one's current legitimate virus protection software), and on my system where I was using Adobe Reader 8, installing version 9 required a reboot, as it did on my wife's computer.

My wife, when confronted with the same Adobe Reader upgrade requirement, under different circumstances, was befuddled and alarmed about the extra software being downloaded and installed (Adobe DLM) and the prompt to install so-called free virus protection software (it defaults to being installed), an immediate concern because of one of the most malicious and predominant viruses out there one that pretends to be legitimate virus-protection software, when it itself IS THE VIRUS.... so her hesitancy and confusion as how to proceed were justified.  This last point, the phony but incredibly real-looking bogus Anti-Virus "virus" can trick almost anyone, (see: http://www.sophos.com/security/threat-spotlight/020510-threat-spotlight....), it appears to be a Microsoft Security Update running a virus scan on your computer, displaying phony alerts about a bunch of viruses it is finding... the phony AV software (virus) comes in many guises... at my previous company we had dozens of laptops users fooled by this with their computers trashed and requiring a redo, and my wife's computer caught the virus (I was able to remove the virus), my daughter's computer got it twice (was able to remove it the first time, the last time around requiring that the whole operating system Windows XP be reinstalled).  So, an upgrade to Adobe Reader, that wants to install anti-virus software, should raise a red flag, many users will not know what to do with this situation.

The point of my message, was to alert readers of the IRG May 2010 issue, is to be very aware of what the upgrade steps/concerns might be.

The other problem with making something backward compatible is, how far do you go? We are trying to make the best use we can of the facilities available free to access.We are also mindful of download limits for folks, too.Do let us know of others are having problems and we will see if we can help.

In businesses, we always set PDF creation utilities and software, to create the PDF as PDF Version 1.5 (Acrobat 6.x), as that version is the most universally used (it takes a while for all users in the world to catch up), to avoid a preponderance of call-backs saying they can't read our documents.  One also needs to be mindful, that not everyone has high-speed internet access, so for someone in rural areas like Jane McGary, still using dial-up telephone access, to download and install a 38 Megabyte update, and the adjunct software, is not quick and easy task.  The newer version of Adobe Reader states a System Requirement of "•Intel® 1.3 GHz processor or equivalent"... on two other computers used by my family members, both or only 1.0 GHz processors... yes we probably need to upgrade our computers too.... but I'm not "going there" at the moment.

I bow to your greater technical knowledge, Mark and I quite agree that one should always be wary of any "sneaky" add-ons. I  can only say that I have made all the IRG pdfs and have changed nothing from issue to issue. If there is a difference it was not of my deliberate action ..... I am no expert in such matters, I freely admit!Naturally, if there were any deliberate change then it would be both politic and polite to make an announcement to that effect though a little tricky to do so when I was  unaware of any such need.

If anyone has been having trouble viewing the IRG, please contact me at info@srgc.org.uk and I will willingly send you a version saved to the earlier specification, as Mark recommends.

I am aware that not everyone is able to have a broadband or even a reliable service for their internet connection: I live in the city that is the oil capital of Europe and my broadband connection falls off all the time but I soldier on.... it still beats the carrier pigeon and the slate!  ;)

Issue 6 June 2010 of International Rock Gardener is now online at the SRGC website http://www.srgc.org.uk/logs/index.php?log=international .....for the listing and here for the June issue.....

[size=12pt]This issue is the beginning of a concerted celebration of the various rock garden organisations around the world and, of course, that brings us to the subject of the International Conference to be held in Nottingham, England in April 2011, so there are the first two  introductions to the Speakers for that Alpine Extravaganza..... including, I'm delighted to say, NARGS own Todd Boland !  :)

More about the other Conference Speakers in upcoming issues. [size=12pt]The deadline to take advantage of the great discount for early booking for this event, which only takes place every ten years in the UK, is the end of Agust 2010, so make a note in your diaries to be sure of securing your place in good time! The event is being organised by the Alpine Garden Society and will be held at the East Midlands Conference Centre at the University of Nottingham....see here for a flavour of the venue: http://www.nottinghamconferences.co.uk/emcc/

and here for the programme : http://www.alpinegardensociety.net/events/Eighth+International+Rock+Gard...

and, most importantly   :D here for  booking your place:

What a lovely article Maggie!  You did your homework finding the various internet groups where I have posted pics!  I hope I can live up to the expectations!  Really looking forward to the International meeting and as luck should have it, I will leave the day after the meetings conclude for a 1 week botanizing trip to Crete.  Looking forward to that too!