Such is life, living right next to the Rockies. I have a friend in Boulder who saw a parked car blown across the street during one of Boulder's infamous windstorms. And he also saw a roof go sailing down the hill.Here, I'm about 6.4km east of the foothills. Mount Falcon is 2377m so there isn't the dramatic slant to the foothills like the Flatirons in Boulder, and the winds are somewhat less frightening.All sorts of things blow into the yard (and get stuck on the cactus). Never money, of course. One time we had high wind blowing for days, and at the end of it (I don't know how many times I've told this story) there was this box flapping in the front yard. It held an entire, almost fresh, cake, inscribed "Congratulations, Renee." Poor Renee. 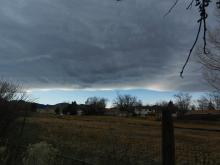 We have had a crazy weather the last three days. First a fullblown gale hit the northern parts of Norway and a high tide too (the highest recorded ever) damaged a few houses, sheds and boathouses. The next day another strong gale (both were caused by low pressure systems like hurricanes) hit the southern parts of Norway. The biggest waves that hit the coast reached about 20m tall. South of me two people, although standing far from the sea) were swept away and drowned. The next three days the weather forecast tells us that we will get a lot of rain (300mm). I crossed the mountains yesterday and timed the drive between the storms. However, the mild weather melted the snow even at the high mountains and a lot of meltwater and rain filled every creek and river  like the spring floods. All went well though - I was almost alone on the road!

On the lighter side; Bob, did you eat Renee's intact cake?

On the more serious side; Trond & Lori, sorry to hear of extreme weather conditions, sounds frightening, and a reminder of just how powerful mother nature can be.

Threw the cake on top of the compost pile, away from the lips of border collies, and the squirrels ate it all.

As my Great Aunt Mary would say - Zoy! (I think it's a Slovenian derivation.)  I'd like to see the Flying Nun negotiate that weather ;D.  That the downtown was closed really accentuates the severity of the matter.  Being from the "flatlands", it hard for me to grasp such a calamity with a storm accompanying.

And what a coincidence.  Today I was riding my bicycle and along side the road was an expensive looking unside-down cake pan still with cellophane wrap over the "top" (so I assume there was still cake).  I would have retrieved it for the pan, but then I would have been late for an appointment.

There was a patch on the side of the house where my neighbor claimed a railroad tie ("sleeper", across the ocean) was blown through the wall once. My neighbor is a nutcase, but it does get windy here. 90 mph, say (144.8 kph). Breezes. Wind comes roaring down the eastern slope of the Continental Divide. People who think that alpine plants are covered in snow all winter might contemplate the fact that the top wind speed recorded on Trail Ridge Road in Rocky Mtn. National Park is 176 mph (283.2 kph) ......No cakes flying there.

That's what's called a "chinook arch" here... there was one just like it out my office window today.  Yep, we do get chinooks frequently but, like I said, they're not usually so damaging!  They usually just break the cold spell, melt the snow and give people headaches (although the latter claim was supposedly debunked by a recent study... I can't comment, not being affected that way).So, with no trains running through the downtown today, I made it to work in 1.5 hours today (as compared to my usual 1/2 hour or so)... can't complain, as many people waited hours for buses. Lots of damage - trees falling on houses and cars and across roads, a roof torn off, lots of shingles/siding blown away, many semis blown over and rolled on the highways.  The wind at ground level was bad enough but at the height of the taller buildings, it was clocked at 150 kph, 90 mph (hurricane force winds or gale force 12 on the Beaufort Scale), hence the flying debris and broken windows.  Fortunately, there were no major injuries, despite that "showers of glass" were reported from downtown... very lucky, unlike Trond's account.More damages from the same weather system along the southern mountain front... a huge grassfire driven by the wind near Lethbridge burned down a couple of houses.

No damage in our yard... I didn't even think to look for money or cake though!  Hilarious, Bob!

I remember being in Boulder (where I majored in Stupidity) during a windstorm, and thinking it might be good kite-flying weather. The kite went up, and was torn to pieces by the wind. Highway 93, runs from Golden to Boulder, passes Rocky Flats, where no trees grow. There is a reason for that. It's difficult if not impossible to steer a car when the wind really blows. On a railroad curve a little further north, at equally treeless Marshall Flats, is a siding with line of abandoned coal cars filled with rocks, that I hear was left there as a windbreak, to keep trains from being blown over where the line curves and is particualrly vulnerable to high winds. Well, at least it blows the smog away.  But I've never heard of damage like you got.

Some weather pictures from the last days - not mine though!