Canada's Yukon and northern British Columbia are not the exotic locations reported by some NARGS members, but I thought I'd try to post some photos from our trip this June 15-July 12, at the height of the wildflower season there.  Many of the plants we see grow also in the Rockies and many are circumpolar.  There are a number that fall into the category of "why aren't we growing these!" and I hope to track down a seed source for a few.  One of the advantages of the area is the ease of getting to the alpine:  one can drive to the alpine on the Dempster and Haines highways at least, and with some reasonable hiking can get into the alpine in many other areas.   What a delight to see patches of Silene acaulis on the road verge at Chilkat Pass!

Some of the photos were taken by my husband Jeff Thompson.  Let's see if I can post them... These three above were found near Whitehorse in an area called Bonneville Lakes - on a ridge:

The Dempster Highway near North Fork Pass is easily accessible from Dawson City (of Goldrush fame), and one can stop anywhere and hike into the tussocks formed by cotton-grass and other sedges, interspersed with bogs underlain in many places by permafrost:

Wouldn't Lapland Rosebay (Rhododendron lapponicum) be a wonderful plant in the rock garden?  It must be difficult to cultivate.  We also saw it in drier situation in northern BC near the Alaska Hwy, definitely in limestone mountains rather than acid soil.  Here is is with some Ledum decumbens among the boggy tussocks... 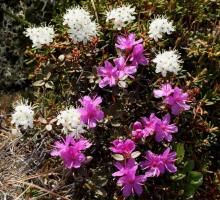 Along with Pedicularis ssp, there was Papaver macounii (note the skinny capsule) , Parryea nudicaulis, and Cardamine purpurea (10-15 cm high, would make a great rockery plant): 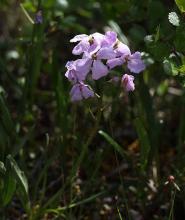 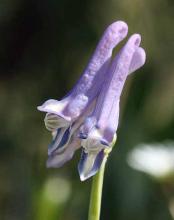 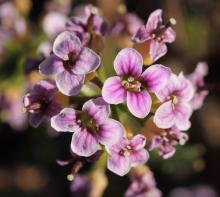 The highways near Kluane and Tatshenshini Parks are high elevation and wonderful for plants.  Here is Chilkat Pass near Haines Alaska:

Around here in wet areas there is Geranium erianthum - an ethereal blue.  Surely someone tries to grow this -- ironically we found some growing on the roadsides in the small town of Watson Lake, Yukon, but I don't think it was cultivated: 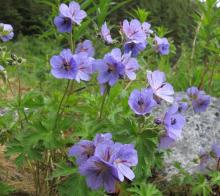 An amusing little plant on the gravel roadsides was Astragalus nutzotinensis with its C-shaped seed pods:

My new favourite Penstemon is P. Gormanii, which grew in profusion on dry hillsides, sandy roadsides, and cliffs from Whitehorse to Dawson City: 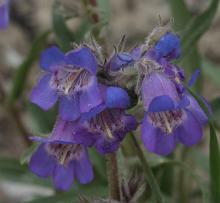 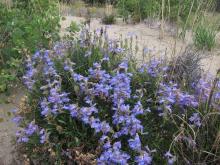 The last area we hiked in was near White Pass which is on the border of BC and Alaska.  The plants start to trend towards the coastal with Lupinus nootkatensis replacing L. arcticus in the alpine, and lush foliage along the trail (along with much bear scat but fortunately only one moose). 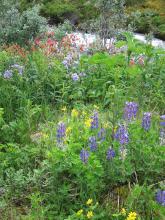 And one final oddity, found at Muncho Lake in northern BC (though we have seen it before in central Yukon):  Campanula aurita: 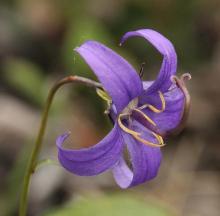 WOW!!  What amazing and

WOW!!  What amazing and unfamiliar plants!  If they are not being grown in gardens, why indeed?  The Pedicularis are absolutely stunning!  Thank you so much for posting your trip, Linda - it has made my day!  :-)

What a wonderful natural

What a wonderful natural garden in the photo next to the one of the beautiful lake .... thanks for sharing!

Magnificent plants and images, so many thanks for posting.

Fabulous plants and scenery, I think I'm going nutso for Astragalus nutzotinensis, with Pedicularis lanata and Penstemon gormanii coming in as close seconds.  It is wonderful seeing plants in their natural setting, thanks for sharing them on the NARGS Forum.

Weird, this post just showed up as a New message on NARGS Forum, more that 12 hours after I posted my response, and one's own response should not trigger a "New" message state.

Hi Mark -- I just updated my

Hi Mark -- I just updated my post to fix some spelling errors.  Maybe that is why it showed up as New.

Such wonderful plants!  And

Such wonderful plants!  And the photography is superb.  It would seem these would make great rock garden plants, if they can adapt to our not so alpine environs.

I notice that the Pedicularis sudetica flowers tilt, way more than our native P. lanceolata here in Minnesota.  Even in your photo taken at eye level, they give a swirling effect to the flower spikes.  How grand it must have been to view them from directly above!

The Astragalus nutzotinensis, was it in bloom and ripe seed pods at the same time?  Are the seed pods from last season?  Very interesting!

The geranium must have relatively long lasting individual flowers.  It looks s though the stamens develop and mature well before the stigma is receptive.  That is, if I am seeing what I think I am.  And how often does one see blue pollen!!!!

I had one Penstemon gormanii seed germinate this past spring.  I haven't noticed it lately, and I wonder now if it is still alive....

Very interesting seeing a totally different landscape and plants to what I am accustomed to. Thanks for posting.

Hi Mark -- I just updated my post to fix some spelling errors.  Maybe that is why it showed up as New.

Yes Linda, that's probably the explanation. On the previous NARGS Forum marking an edit would mark the messages as edited, with a time stamp; still getting used to the fact it doesn't work like that here.

You mentioned a plant that I would love to see, that is, if you have taken a photo out if, Douglasia gormanii. And, did you happen to take a closer view of Oxytropis nigrescens, those patches of color in the vast landscape are beckoning some close-hand study :-)

LOL, I was wondering the same thing, until I noticed that Linda had already mastered the image embedding.  The name shows up when you hover your cursor over the thumbnail.

LOL, I was wondering the same thing, until I noticed that Linda had already mastered the image embedding.  The name shows up when you hover your cursor over the thumbnail.

Oh, it must be a browser-related issue, for me, only a portion of the caption displays when mousing over the image, never do see the plant name.  I went into edit mode as a test, and can see the name of the image and the full caption, with the Corydalis name.  I will test with other versions of my browser, and other browsers.

Sorry Linda to distract from your excellent post with these "forum experiences" questions that we're trying to sort out.  Back to plants, I am really taken by this little Corydalis, not familiar with it. Can you tell us more about this plant, how large or small is it, under what conditions does it grow.

Thanks, everyone, for your

Thanks, everyone, for your interest and kind words.

Yes, the captions (Title on Embedded images) do not always appear - I sympathize with your efforts to debug as I don't see what I did differently for those that appear correctly.

The Corydalis pauciflora was found near North Fork Pass on the Dempster Hwy,  in a willow thicket that had some openings to let sun in.  Somewhat mossy wet place, but not a bog, though we found Chrysosplenium wrightii within a few feet.  John G Trelawney's "Wildflowers of the Yukon, Alaska, & Northwestern Canada" says about the Corydalis "...inhabits moist areas near and above timberline from Alaska and the Yukon, E to the Mackenzie Mtns and S. to N. NB".  It's about 6-8 " tall.

I'll add a photo of Douglasia gormanii.  I should add that we are open to corrections on our species identification for this and others.  The Pedicularis species were not always easy to distinguish.  We used William J Cody's "Flora of the Yukon Territory", 2000 as well as Trelawny.   We loved that you can find this tome in the bookstore in Whitehorse.

Here's the view of what I believe to be Pedicularis sudetica , looking down.

Thanks Linda for showing the

Thanks Linda for showing the Douglasia, a sweet little thing, surrounded with attractive rosettes of what looks to be a Saxifraga species. The spiraling effect on that Pedicularis is really quite special, a plant in motion.

I looked up Corydalis pauciflora in Hulten's Flora of Alaska and Neighboring Territories, and see that it is semi-circumpolar, that is, its range extends to the Altai Mountains. Looking up where exactly that is, I found "a mountain range in East-Central Asia, where Russia, China, Mongolia and Kazakhstan meet".

PS: Linda, I fixed the caption on your Corydalis pauciflora photo, it seems that certain characters such as dash " - " or colon " : " become interpreted in some fashio, to only display text after that character, depending on on'e browser.  I changed you caption  (Title Text) to use a comma.  For the next caption to take effect, one deletes the photo in their Edit Preview mode, places the cursor where the photo was, then from the uploaded photos list find your photo, hit the Insert button to re-insert it.