Will the real Satureja montana ssp. illyrica please stand up?

My garden has two plants labeled Satureja montana ssp. illyrica, from two different sources. They don't even look like the same species, though both are clearly in the mint family. 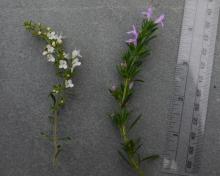 One is white-flowered plant from Well-sweep Farm. It looks just like my straight species of S. montana, except for two things. First, it has a prostrate habit with twisting stems. Second, it is deciduous for me (zone 7). Because of the similarity to plain S. montana, I'm reasonably sure this is S. montana, but is it ssp. illyrica?

The other plant is a pink-flowered plant from Wild Ginger farm. The flowers are larger, the leaves are only mildly scented, and the habit is more upright. 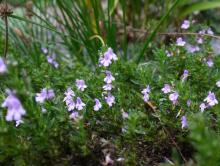 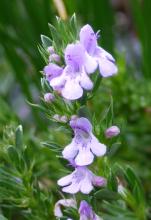 Any thoughts on this?

Wish I could add something

Wish I could add something useful to this but I can't.  Unfortunately, I have not yet been able to find species descriptions that might, perhaps, shed light on what is supposed to distinguish the subspecies.

Here are some photos from the wild of what is said to be ssp. illyrica:

I have a sense that my plant, which I've shown on this forum, has flower size intermediate between the ones you show, though I don't have pictures of it in bloom with anything in the photo for scale.  The flowers on mine are more of a pale pink.  It was grown from seedex seed as ssp.illyrica, but doesn't look much like the plant in the link re. flower colour and proportion.  It develops a thick layer of fallen leaves beneath it but also retains leaves on the woody stems through the winter.  The stems are upright, not twisting.

[Moderator MMcD: post edited to fix broken link, used the "Link" tool on the toolbar to fix it]

Lori, that link is very

Lori, that link is very helpful. The photos of the wild plants look just like my pink-flowered plant, so I'm concluding that it's the pink-flowered one that's most likely to be Satureja montana ssp. illyrica.

I just discovered that I'm not the only one who thinks that the pink-flowered plant looks like a separate species from the typical S. montana. According to the Kew/Missouri Botanical database of plant names (http://www.theplantlist.org/), the correct name for Satureja montana ssp. illyrica is Satureja subspicata ssp. subspicata