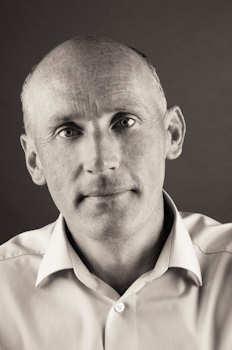 It is a great pleasure to announce that Martin Walsh will tour our Western Chapters in May of 2014 to present programs.  For information and to sign up for the tour please contact Harold Peachey hlpeachey@gmail.com
Martin Walsh is an Irish garden designer and consultant and a modern-day plant hunter who lives and works in Dublin. Since his early teenage years he has had a love of all types of plants with a particular interest in perennials, bulbs and Irish wildflowers. One of his great passions in life is observing plants growing in their native habitats whether in his own back yard or in exotic parts of the world.
His interest in alpines came about as a result of studying the alpine flora at Pike's Peak in the high Rockies while working as a student in Fort Collins, Colorado. The spectacular Alpine Garden Society Exhibit at the 1996 Chelsea Flower Show, which featured many of the plants collected during the 1994 ACE Expedition to China, fuelled his interest in the flora of the Sino-Himalayan region. This resulted in him embarking on three expeditions to China; the first of these was to Yunnan in 1998.
In the course of the last twelve years he has participated in numerous expeditions, especially to the Himalayas as well as the Drakensberg Mountains in South Africa and Lesotho, Tien Shan in Central Asia, Hengduan Mountains in China and the Pontic Alps in Turkey etc.
To date he has undertaken eight expeditions to various Himalayan regions and often to areas that are comparatively underexplored including western, central and eastern Bhutan, Arunachal Pradesh, Tibet, Nepal and Himachal Pradesh.

In 2008 he led an expedition to central Bhutan, an area that has remained virtually unexplored since Ludlow and Sherriff's explorations in 1949. In 2005 Martin mounted an award winning photographic exhibition in both London and Dublin and his new exhibition featuring botanical, landscape and cultural images from China is currently on show in Scotland.

Topics: HIGH AND LOW IN THE HIMALAYA

CHINESE AND HIMALAYAN PLANTS FOR THE GARDEN

Topic: BHUTAN - IN THE FOOTSTEPS OF LUDLOW AND SHERRIFF

Topics: HIGH AND LOW IN THE HIMALAYA

CHINESE AND HIMALAYAN PLANTS FOR THE GARDEN

Topics: CHINESE AND HIMALAYAN PLANTS FOR THE GARDEN

Topics:
HIGH AND LOW IN THE HIMALAYA
An AGS Conference Talk.
A RETURN TO THE LAND OF THE BLUE POPPY
An account of the 2009 expedition to Yunnan.
IN THE MOTHER OF GARDENS - CHINA
Features the best plants encountered during three different expeditions to China including the provinces of Sichuan, Qinghai, Yunnan.
CHINESE AND HIMALAYAN PLANTS FOR THE GARDEN
A selection of the most growable plants from this region.
BHUTAN - IN THE FOOTSTEPS OF LUDLOW AND SHERRIFF
An account of three different expeditions to Bhutan where we followed many of the same routes taken by Ludlow and Sherriff during their various expeditions to this fascinating country.
PLANT HUNTING IN ARUNACAHAL PRADESH
An account of the 2012 expedition to this extremely rich but relatively unexplored region of NE India.
Speaker Program:
Speakers Tour