Several years ago, curious to see what would come of it, I nursed a potful of Saxifraga 'Foster's Red' seedlings into
adulthood. Of those that survived to bloom most were light yellow or white flowered; I'd say some 80%.Three or four were
"red". Two, perhaps three of these exist here still. I've encouraged the last and am taking notice of the next to last
listed here. Unlike Kabschias these are not insistent upon lime which may be why these "silvers" grow better in
northeastern gardens. That said, I haven't always found these plants easy to keep healthy. The first plant shown below is
Saxifraga paniculata 'rosea' as I have it from the late 90's. It could have been involved in the cross as could have S.
'lutea' and diverse others.The second plant is S. 'Foster's Red' followed by a photo of its rosettes. Observing this
digital photo, it struck me that this one and the next have instances of multiple petals! 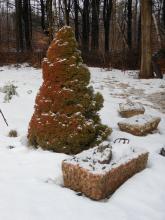 The first seedling pictured below is a much stronger bloomer than the last. Both are quite different! I hope to work both
of them up into larger colonies for a more thorough evaluation. I'm tentatively calling the last one 'Uncle Mike's Black
Betty Saxifrage' or just 'Black Betty'. Just five petals here and though they tend to be imperfect, they are large
compared to the parent and of a glowing deep burgundy color that eventually fades into a pretty white mottled antique
velvet. The flower stem is a deep red, darker than that of any other saxifrage I grow here. Unfortunately it does not seem
to produce alot of stems but the rosettes (last photo) are concise and very attractive. The large flowers make for a nice
show despite their scarcity. I don't think it is fertile. This is a very pretty plant!

An interesting group, Michael, all look like they are good out of flower..