This is my first time on this forum. I've been adding dwarf willows to my gardens over the past few years and am interested in propagating more. If there's anyone out there interested in swapping cuttings now would be a good time to do it. If there's interest let me know and I'll post what species I have. Thanks.

Hi and welcome!
I'm still just wishing for dwarf willows, so I can't help ;)
Looking forward to seeing what you are growing!

Hello Mark!  Thanks for joining our "plant party"!

We'd all like to know (and see) what you grow.  I grow a very nice, small Salix repens 'Iona Form'.  Not sure how valid the cultivar name is, but it's what I bought it as.  It's a very small leaf form of the species.  Here it is in a 3 inch pot and a trough.  As you can see, given a larger root run, it can be very vigorous.

I could probably send cuttings or even a plant.  Whereabouts do you live?  Feel free to add a signature to your profile that will appear at the bottom of each message you post.  I hope you plan to participate often.  ;D
I do grow other willows, but they aren't dwarfs: http://nargs.org/smf/index.php?topic=274.msg7496#msg7496

Hi, Mark! Welcome to the forum!  I would love to hear about your techniques for propagating willows from cuttings, and see your gardens.

Exchanging cuttings sounds tempting (once I get some going), but unfortunately, I think cross-border shipping might be more trouble than it's worth.  However, I'm very interested in getting some started from my S. x boydii, S. retusa, and another gnarly little one whose name I've lost... then maybe I can help out Cohan!!  :)

Very fun.  I've been on the scout for willows.

I've got only one dwarf Salix 'Boyd's Pendula'.  Some say it's a boydii, some place it as a hybrid.  I'd love to trade a few if you don't have that one.

Welcome to the Plant Party!

The species I have been growing for a few years are S. arbuscula, S. repens 'Boyd's pendulous. Salix nakamurana var. yezoalpina. I added a few last year. Salix arctica "petraea, S. retusa, S. polaris, S. tarraconensis and S. moorei. Hopefully will be receiving S. repens 'St. Kilda form' and S. lindleyana in the mail by April. What I've done for rooting them is cut them in late winter or early spring (before they leaf out). I stick them in moist perlite in the greenhouse and in a month or less they root. I don't have may photos of them at this point. I did just take one of arbuscula but not sure how to upload it. I would like help with figuring out how to do that.

Thanks, Lori! Maybe someday I will be somewhere in the mts at just the right time to get seed, or at a place where I feel okay about taking a cutting!
Mark- when you post a message, you will see a button at the lower left of the message window 'Additional Options' click on it and it will give you the option to upload photos among other things; there are notes there about file types and sizes..

I had Salix lindleyana for several years.  When the literature says it does not like to be crowded, believe it.  The slightest bit of encroachment by a neighboring plant causes it to brown and recede.  It doesn't like our summer heat here either.

In addition to Cohan's photo posting info, you can look at a FAQ posted here:
How to attach images and documents

This tells you how to post photos at the end of your message.
Once you understand this, you can go one step further if you like:

If you want to insert your photos withing your text message, you can learn how here:
How to attach inline images

As I mentioned, I wasn't certain about the heritage of 'Boyd's Pendul-a(us) [ain't that Latin sumtin']

I agree with the crowding and lindleyana.  Mine lasted six or eight years and went the way of things grumpy.

As I get the rock garden going, I hope to include more into the slope.  Ah... another project for the summer.

Hi Trond, I would love cuttings of some of your plants. I'm not sure that it's feasible as we're on different continents. Thanks for posting your images.

Hello Mark B, a belated welcome to the NARGS Forum.

I have killed many Salix species, invariably losing them to too hot and dry conditions.  I bought three small potted Salix from Harvey Wrightman in 2010, plunged the pots into the ground until I had a good spot for them, two of them died over the summer :-\  In one of the far corners of my property where hoses don't reach, I believe my very old plant of yezoalpina (Salix nakamurana var. yezoalpina) succumbed to the record-breaking drought of 2010.

One dwarf carpeting Salix however, has done extraordinarily well, to the point it is spreading far and wide consuming a garden path forcing me to "willow walk" to reach a garden shed, it one that goes around as S. hylematica. This Asian alpine species has gone through several name changes over the years, sold by Siskiyou Rare Plant Nursery, but fairly common in nurseries now as S. hylematica.  It is listed in Annotated Checklist of the Flowering Plants of Nepal, this is Himalayan species, also found in Bhutan, 2600-4500 m.
http://www.efloras.org/florataxon.aspx?flora_id=110&taxon_id=242425183

It has shiny, soft narrow leaves, and a profusion of little reddish catkins.  The photos show this species, originally planted at the top of a small embankment held back with rocks, but it has draped itself down the enbankment and flourishes with the extra moisture found in the low flatter areas of garden paths.  Since these photos were taken, it has reached raised garden beds on the opposite sides, so this year I'll need to take a spade and lop off the last 2'-3' of its periphery.  Since it roots as it goes, I'm sure I'll way more "starts" of this salix than needed.  For what it is worth, it stands up to foot traffic quite well.

Looking at photos of S. hylematica and S. lindleyana, they seem rather similar, and I wonder if they might be mixed up in horticulture. 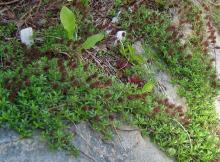 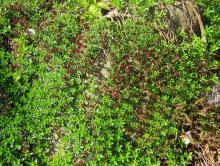 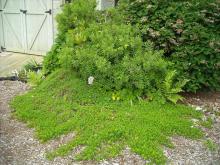 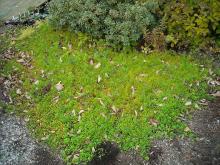 I looked at pics on the web just now, and I see what you mean, Mark, about the similarity.  But the S. lindleyana that I remember had very closely spaced intenodes, and consequently leaves were more tightly packed than any of those images.  The plant never bloomed for me, and it was circa 2005 when it died from heat and drought.  I don't even have a record of where I got if from, let alone any digital photos.  Maybe it wasn't lindleyana after all...  ???

Gee, who does that remind me of!  ;D There are  a few things I harvested this year, that I'm just not sure of the location of  :-[