Pin and Thrum, and More

Primula are the poster children for the pin and thrum phenomena, although they are not the only ones that employ such a way of pollination. The physical differentiation between the two types of sexual (ahem...) positioning within the same species of flower is easy to understand:

Then there is the "thrum" form, when the male and female parts switch positions: stamens are relatively long, and the pistil is short (and hardly detectable in the photos). These are thrum flowers.

I learned about this long before the age of computers, and while the basic "what" was easy to understand, no one could tell me the underlying reason "why". Why does it insure cross pollination? Everywhere I read that these two kinds of flowers force cross pollination, but nowhere could I find out how! ???

Well, I finally did figure it out for myself, and I have to say I was quite proud of my deductive thinking when I did. So much so that, if you don't know, I'm not going to say ;), at least right away, and let you ponder for a while. Someone else can do the explaining.

Meanwhile, for those who already "know it all", there is a good chance you don't ;D. Wikipedia goes into more detail with correct terminology and the concept of trimorphism, too. Read it here:
http://en.wikipedia.org/wiki/Heterostyly

This is a fascinating subject!

The different lengths of stamens and pistils in heterostylous flowers are adapted for pollination by different pollinators, or different body parts of the same pollinator. Thus, pollen originating in a long stamen will reach primarily long rather than short pistils, and vice versa.[1][2] When pollen is transferred between two flowers of the same morph, no fertilization will take place, because of the self-incompatibility mechanism.

I don't think I have posted these yet:
I received this as Primula polyneura, but it could be a close hybrid.  The leaves seem a little too elongated to me... 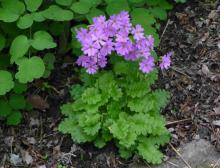 And this is a hybrid heavy on the Primula veris: 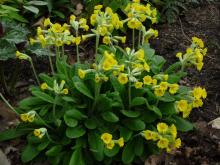 I don't think I have posted these yet:
I received this as Primula polyneura, but it could be a close hybrid.  The leaves seem a little too elongated to me...

Whatever it is, it's lovely! Save the seed and donate it to the Primrose Society!