On-line election May 15 through May 28 (midnight, U.S. EDT).  All members will be sent an email link alerting you when the election is open.

If you did not receive an email message that the election is underway, please send your votes for three of the four candidates to NARGS' recording secretary, Joyce Hemingson (email:  jhem1022 AT gmail.com). She will verify your membership and record your vote.

Michael Guidi (Colorado): Michael is a horticulturist at the Denver Botanic Gardens, where he manages the Mordecai Children’s Garden that showcases Colorado life zones from the Great Plains to the alpine tundra and includes several crevice gardens. While he grew up in upstate New York, he’s since fallen in love with the flora of the Rocky Mountain region. While alpine and high elevation western flora are his main areas of horticultural interest, he is also passionate about keeping up with the latest in plant biology. Michael has also worked in the Rock Alpine Garden at Denver Botanic Gardens and has also been involved in a number of field botany projects. 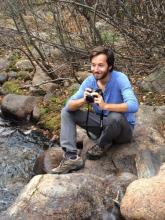 Jeffrey Hurtig (Ontario): is a retired anesthesiology and intensive care physician and researcher. He lives in Ottawa and is co-chair of the Ottawa Chapter. Previously, he lived in Connecticut and was treasurer of the Berkshire Chapter, serving on the NARGS By-Laws Committee. Jeffrey has an interest in growing alpines in troughs on his condominium balcony. He is especially keen to attract new, young members to NARGS and is exploring the needs of this population. Because many retirees and young people live in condos and apartments, Jeffrey advocates troughs as an approach in this regard. As a Board member, he will contribute to the growth and success of NARGS in any way he can.

Mariel Tribby (Missouri): Mariel is a Senior Horticulturist at Missouri Botanical Garden, where she grows a diversity of plants in three rock gardens and a perennial border. She loves to travel and visit plants in their natural habitat, most recently on the Bighorns tour last June. Mariel has been a member of NARGS since 2012. She joined the Gateway chapter in 2014, was the chapter chair for two years, and continues to serve as the chapter liaison to NARGS. She is continually inspired by the knowledge base of NARGS members and the gardens and natural areas she has seen during meetings and tours.

Judy Zatsick (Virginia): Judy has been a horticulturist for 12 years at Green Spring Gardens, a 22-acre public garden and historic site in northern Virginia. She is responsible for the large rock garden at the Horticulture Center. Additionally, Judy also curates the glasshouse collection, oversees the Garden Gate plant shop, manages other gardens, and conducts classes on horticulture. She has been involved with NARGS for several years, including serving as vice president of the Potomac Valley Chapter for the past three years. Judy learned a tremendous amount through her affiliation with both NARGS and the local chapter. As a director of NARGS, she’d like to be involved in engaging a new generation of rock gardeners.