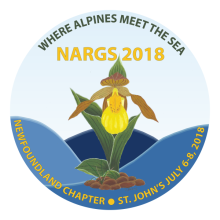 Where Alpines Meet the Sea

Welcome to Newfoundland, the far east of North America! Eastern Newfoundland is a land of botanical extremes; boreal forest of balsam fir, black and white spruce with associated northern woodland plants; a multitude of bogs and fens were grow a multitude of orchids and insectivorous plants; and rocky barrens of the coast which house wind-swept contorted trees and plants of an alpine nature more in common with high elevations of the New England Appalachians. We have the largest population of North Atlantic summering humpback whales, some of the largest seabird colonies of eastern North America and are along the passing route of icebergs calving off glaciers in Greenland. This NARGS venue provides participants with a chance to visit one of the most hauntingly beautiful regions of North America. Newfoundland is truly where alpines meet the sea.