The Life of Harvey Wrightman 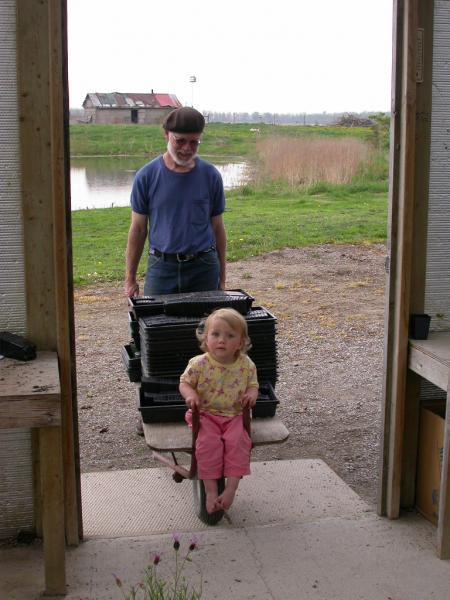 [Harvey Wrightman was a NARGS member since 1986, a NARGS vice president and board member, and co-owner of Wrightman Alpines Nursery in St. Andrews, New Brunswick, Canada. Harvey and his wife, Irene, were co-recipients of the NARGS Marcel Le Piniec Award in 2009 for “extending and enriching the plant material available to rock gardeners.”  Wrightman Alpines Nursery will continue its operation by daughter, Esther, at the Web site: https://www.wrightmanalpines.com/ ]

The Life of Harvey Wrightman

My dad was born in a garden, or pretty near to it. His parents were of the same breed and even had a rockery back in the day. As a boy he built his own natural spring water garden and bog, complete with orchids and other treasures he would order by mail. That he reverted to gardening after university, then teaching, seemed like the only appropriate thing for him to do. I knew him only this way, working with hands as a stonemason and gardener. In recent years he told me that the nursery was the best job he could imagine. And he’s right - all of his children saw this and followed in his footsteps. Dan and Maria are stonemasons, and I took to the plant nursery.

Thirty years ago he and my mom Irene published the first catalogue for Wrightman Alpines. It was a hobby, or more like a passion that was clearly running wild and the only way to make sense of it in the real world was to create a small business from scratch.

The gardens of my childhood were always changing, from just a sandy scree with grapes and California poppies sprinkled about, to granite fieldstone terraces, stone walls, troughs, and eventually his favourite — the crevices gardens. To my child eyes they became a land of fairies. We played every imaginary game in them, hopping from stone to stone, crouching down to examine each flower, imagining what it would be like to wear each one as a pretty dress.

Just as he experienced as a child, my dad would let me build a garden anywhere. At four years old I remember scattering zinnia seeds in a triangular patch, and watching them magically grow. Then there were playhouse gardens full off every kind of cosmos and cottage annual.  My dad never scoffed at other types of gardens. They were all part of exploring, and he’d encourage it by buying some wild collected scented stocks to add, or fresh loads of rich topsoil, or a liner for a pond and bog (“How big do you want it?”).

By the time I was eighteen I had worked my way though multiple gardens. Unbeknown to me — this was my education. That year I walked out on university after only two weeks. To be honest I was always reluctant to go, my grades were good but being in a school was always difficult for an outdoor cat. He picked me up the next day with never a question of whether I was out of my mind. He had left medical school, though rarely talked of it. From what he said, it was what everyone expected him to be, a doctor. But with the freedom of leaving, he was finally able to start doing what he loved again. The autumn I came home was the most poignant and exhilarating season I had ever experienced; I didn’t know that the sweet long days of autumn went on for so long. I hadn’t felt them since before I went to school. This was the year I started working with my dad full time with plants. Up to that point, we had spent many summers on stonework job sites. I was basically the 5' scrawny cement mixer for the sidewalks and walls he built. We worked well together and this just drifted over into plants quite naturally.

But the nursery was different. This was something we both dreamt about.

Harvey (I called him this, never Dad, that’s just the way it was) never thought I was incapable of anything. He didn’t start me off with easy plants like sedums and sempervivums to propagate, like most would with a new employee. There was a bed of saxifrage that he had given up growing, not because he didn’t want to, but because they had suffered under the conditions we had them in. He had just learnt that our water had three times the 'normal' salt content and this was slowly killing treasured plants like gentians and saxifrages. I could tell this was depressing him but he faced it a different way. “Do you want to propagate those Saxifraga? They’re yours. See what you can do.” And that’s how it started. He gave me total authority along with the responsibility to a novice eighteen-year-old to rejuvenate a collection of Kabschia saxifraga. This was how he was.  Not once in my life did he doubt what I thought I could (maybe) do, and he always gave me the tools and knowledge to make it happen.

If there was one thing he loved most, I'd say it was growing seedlings. The spurt of new growth was pure joy for him. To an outsider they'd think he was crazy, excited over a ziplock bag of tiny green sprouts. Or showing the smallest of plants in the crevice garden, with just a flower or two on it.

I know that the one thing he always wished to see was what he called a "democratization" of growing alpines. He wanted everyone to have the opportunity to grow and enjoy them. Seed collectors started this by selling wild, normally unavailable seeds to the general public.  And nursery growers like Harvey continued it in plant form.

When the cancer returned this fall we started to make the transfer of the nursery happen. It was bittersweet — not something I wanted to announce or speak happily of. Hard reality was hitting us fast. In the greenhouse one day he asked me with such sincerity, “Do you like to do this? Does this make you happy?” It does, incredibly!  It’s the best job in the world. That’s all that he cared, that I was happy. Then he quietly went about ordering supplies and setting up the nursery to be transferred, without any bumps or upsets. He even knew that the digging fork’s handle would break soon, so he had a spare one hanging in the shop, ready to be put on when the time came.

Yesterday I was up the hill in the shop, holding a jar of gibberellic acid. Over seventy cups of seeds were sitting there on the workbench, and all I could think was: if I pour the GA3 on these seeds then I have to plant them tomorrow, and what if my dad passes away, maybe I won’t be able to plant them. I should wait. Or no, Harvey would not want me to. Smiling, I knew what my dad would ask as soon as I walked in the house, if he could still hear and speak, “Did you get those seeds soaked?” I poured the GA in the cups and went down to check on him. After two weeks in palliative care and three weeks at home with us he was beyond frail, but the night before he managed to half smile at me and that’s all I needed to keep up the day and night care.

He passed away peacefully on Friday afternoon [December 9, 2016]. Mom had gone into town for medication and I was sitting with him as he lay in bed. I'd played him some Irish airs on the concertina (which he always liked, I'm not sure could hear, but I was hoping he could feel them). I picked up the seed lists on the side table. I was looking at the three of them (Czech collectors: Holubec, Piatek, and Jurášek) and thinking how he had ordered the seeds from one a few months ago, another he ordered half and I picked out the other half while he was in the hospital, and the last one I had to pick out the seeds on my own. There was a huge snow cloud coming across the bay at Brandy Cove — dark, but a bright white top from the blue sky behind it and the snow was just gently starting to fall. Gulls were splashing along the shore; it looked like they were almost playing. I heard him make two quick breaths in. I put down the papers and went over to him, called to Dan upstairs, felt his still chest. He gave one sweet long exhale, and I knew he had slipped away.

I know I shouldn't say this, but it was a very gentle death, not a bit of anxiety on his face, and his eyes were closed. He was very much at peace. I cried, but it was not painful. I'm so glad he is at rest now. At some point it will hit me again, but for now I'm so glad I was able to be with him to the very end like this. For all of my thirty-five years he has been by my side, daily. Essentially I spent my entire life heavily intertwined with him — because we 'got' each other. We didn’t even have to speak to one other as we worked together, because we knew what the other was thinking.

He was the best of dads.

Today I’m going back out to the shop to plant all those seeds.  For him. He needs to know — everything keeps growing.