After a brief experiment with it in the garden, plume poppy (Macleaya cordata) has earned a place very high up on my Most Invasive Plant list! I was aware that it was considered invasive but I thought I'd try one anyway and see for myself last summer. It didn't do much of anything at all last year and this spring, I was even wondering if it had survived... but then yesterday I noticed the distinctive leaves coming up 1-2 feet away from the plant. Upon starting to dig, I found the roots going out even farther - truly impressive! I wish I had a confined space for it but lacking that, it's in the composter.

A similar story with Stachys lavandulifolia in the rock garden... Though the flowers are very beautiful, it seems to have spent most of its energy sending shoots far and wide instead of flowering, so it's been turfed too. The roots went extremely deep and it will no doubt will keep popping up for some time.

Thanks for the warning Lori . I was looking at the beautiful flowers of Stachys  lavandufolia in a catalogue .

It took me several seasons to get rid of Macleaya cordata

I tried Macleya once but it didn't make it. I have spot where it could have roamed free but the slugs (as usuall) found it irresistible. Somebody who wants some slugs? They're expensive though these days as the population was depleted last winter.

Speaking of invasive plants, does anyone know if the biological control trials for Japanese Knotweed, Polygonum cuspidatum, in the UK have had any success?  It's a big problem here in western Pennsylvania as well.

Excellent idea to create this topic.

The single worst highly invasive plant, for which I fear I am losing the battle, is Campanula takesimana.  It is now established in parts of the lawn, in the crowns of shrubs, taking over whole areas.  It has stringy white stoloniferous roots, and if the slightest piece is left behind, it sprouts ten-fold. I haven't tried round-up on it (I don't use chemicals), but it is so horrendously aggressive, that I can easily envision it getting loose into the neighboring woodlands and becoming the next terrible invasive, so I may have to give round-up a try.  The flowers are big beautiful bells, in white, pinks, and lavenders, strongly dotted inside (the species is related to C. punctata, another terribly invasive weed).  Here are 3 color forms; don't be fooled!  In the areas shown in the photos, the Campanula came in on its own. 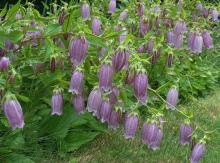 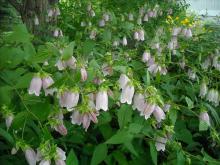 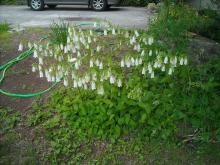 Well, Mark, I won't ask for seed ;) I already have it in the garden and it is behaving itself and not spreading - or to be precise, it is kept in a restricted area and makes a nice clump. No seeding around. I have some other Campanulas that is worse! (I'll show some pictures later)

I did the same myself when I was "lucky" and had managed to grow one plant from seed :-\ :-X

Relative to the rock garden..

Relative to the rock garden...

Agoseris glauca is rhizomatous (as I suppose I knew from reading Flora of Alberta).  I thought I'd see what it was like in the rock garden (given that it is a locally native montane/alpine plant) but pulled it out this spring  when a shoot popped up about 18" away.  It was rather large and not overly interesting, though nice to see in the wild.

My patience is getting short with Lancea tibetica.  It is rather fast spreading for an alpine garden plant, though at least the spread is regular and predictable, instead of popping up randomly at great distance from the original planting.  I've been hanging onto it nonetheless, hoping to see the darn thing bloom.  Then I read recently that it is reluctant to bloom in captivity... argghh!

Recently, we have redesigned

Recently, we have redesigned the structure of the garden and our engineer advice us to remove all the invasive plants as they have the ability to spread aggressively outside its natural range.

My garden nemesis is

My garden nemesis is Campanula rapunculoides. Many years ago, someone thought it would make a nice garden plant, and now it is throughout our lawn, and regularly appears in our new gardens, sprouting from tuberous roots that may be up to 40 cm below the surface of the soil. Whenever one shows above ground growth, I get out the fork, and do my best to find the parent root and remove it. It is shocking to see some of the plants that are still being sold as perennials/groundcover or perennial seed in the nursery trade (Campanula rapunculoides is just marginally better than Aegopodium podagraria... I've seen both offered as seed or potted plants).

I consider it shocking as

I consider it shocking as well!  This is a horrible weed everywhere.  It's escaped from gardens into natural areas here.

Yes, finding the "parent root" - the white, carrot-like, vertical root that's usually several inches or a foot or more down into the soil - seems to be the key to fighting it.  Pulling out the thready roots that join plants in the colony has no effect.   I've kept it out of my yard that way (by digging out the white basal root), though my neighbor has an infestation.  The really sad thing is that people willingly introduce it to their yards!!