Flowering now in the Northern Hemisphere 2014

I suppose it is better to start a new thread than to continue the old one!

The winter starts today! Till now we have had a prolonged fall with temperatures between 5 and 10C (41-50F). Today the sun appeared in the sky for the first time in weeks and the temperature subsequently dropped below the freezing point. The forecast tells that we will have this weather for a week or more.

The mild weather has not so far caused any untimely growth probably because the plants think it is still fall as we have had virtually no frost till now. (And it wont be as cold as you have had over there either - down to -4C/25F probably)

A few plants have started flowering though, among them are some hellebores and the Viburnum farreri. The last one has a very pleasant odor.

Our weather has been very

Our weather has been very similar - the first real frost only a few days ago. We are very lucky to have such a relatively mild climate which allows the garden to get going again so early in the year. Unfortunately it also adds to the weed problem and we have been busy clearing areas with snowdrops and hellebores of nettles that have seeded in from an overgrown field next door. Galanthus 'Mrs McNamara' is one of the earliest we grow along with a tiny plant of G. reginae-olgae ssp. vernalis 'John Marr'. The annual snowdrop fever is building up for February when the garden totally lights up with these plants, and they also grow beautifully naturalised in local woodland. We grow them under rows of dwarf apple trees along with many other woodlanders and ferns like Asplenium scolopendrium 'Angustatum'.

Is this common in the fern world?  I wouldn't know....

I didn't know that Rick - we

I didn't know that Rick - we are growing quite a range of ferns and I have occasionally grown them from spores but I don't know how true this one would come. I don't suppose the fern fever that gripped British gardeners in the Victorian age has ever been equalled, except maybe by the huge interest in snowdrops that there is now. This is one of the earliest narcissi, N. 'Cedric Morris', exceptionally slow in our garden but giving a bit more colour.

Great to see your Galanthus

Great to see your Galanthus Tim.In about 4 months G.reginae-olgae will be in bloom here and later on I have high hopes that some of the yellows from seed and recent swaps will also be flowering and showing true colour....

of revamping another bed ,ripping out and giving away the larger perennials so I can plant more bulbs and Trilliums and hopefully over time achieve the mass planting I see in one of your snowdrop pics.

We're very pleased to see these Narcissus flowering for the first time. I scraped a few seed into the grit, ( sent by one of the exchanges as "compensation" for not getting one of our choices ), a few years ago and this is the result. At only a few inches high they fit in perfectly with the surrounding plants, and are early enough to not get lost and ignored in the 'Great Bulb Rush' yet to come,

. They were sent as N. romieuxii, but given the promiscuousness of this group, they are more than likely a mix of species! 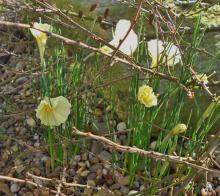 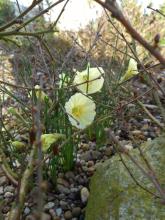 Nice also to see a few older friends beginning to put in an appearance once again. Our first Galanthus in the garden this year ( G. elwesii ), Cyclamen coum, and the leader by far in a large patch of Crocus 'Blue Pearl'. 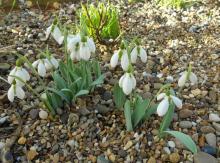 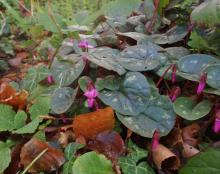 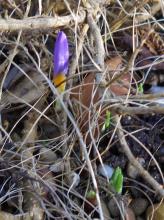 Tim, I like that Asplenium! I grow some in my garden but not any like that one.

Rick, although Asplenium scolopendrium is native here I have never seen it in the wild. But the ones I have in my garden seem to keep their leaves more than two years although the spores ripen the second year as you say.

The first of the bulbous Iris

The first of the bulbous Iris sp. are beginning to flower here. 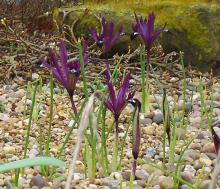 As soon as there is any sign of life, through the surface of the growing medium, Corydalis malkensis produces flowers and goes on to do so well into April here. Well worth its place in any garden in our opinion, 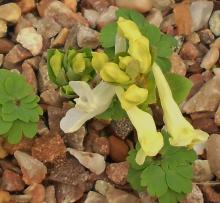 Corydalis is one of my

Corydalis is one of my favorite genera! I haven't seen flowers yet but some of my species have produced a lot of new leaves and also buds. Have to take a closer look tomorrow!

Autumn is upon us but some

Autumn is upon us but some plants are still in flower - or shall I say has started a bit early?

This Forsythia usually blooms in March but now it has started flowering while the autumn coloured leaves still hold tight.

The last of the autumn crocuses - the others were flattened by heavy rain the other day.