I imagine E. revolutum is worth a try outside up here in zone 4, but what about the others?

What do you consider "worth a try"?  Nice flowers?  Good chance of survival?  Revolutum is a nice color, but it is native very close to the Pacific Ocean, and may not be very hardy.  This is an area where +40F in winter is really cold.  However, my revolutums in the garden with mulch have survived a week of 12F without losses.  In containers, they would be mush.

Oregonum is native to the Willamette Valley, and may be a bit more hardy, but maybe not hardy enough for the cryogenic winters of Minnesota.  Grandiflorum is probably the most cold-hardy, but it doesn't like wet soil in the summertime.  Grandiflorum and montanum are nearly impossible for me to grow in the mild Pacific NW.  I'm not sure why.  Even in its native haunts, grandiflorum doesn't seem to be very vigorous, at least the ones I've seen.  Montanum grows above 5,000 feet, but gets deep snow cover, so I don't know how hardy it is.

I've never grown helenae, but I would imagine it's about as hardy as californicum, which grows in a mild maritime climate, but at around 3,000 feet altitude, where it might get some snow cover.  There is a whole group of California/Oregon Erythroniums that look very similar to californicum and oregonum.  I'm not sure they are all worth growing, unless you run a botanic garden.

E. elegans might also be worth trying, if you can find some.  It comes from a high elevation in the Oregon coast range.  In my garden, it emerges several weeks later than oregonum.  I may be able to spare some seed this summer if you are interested.  I suspect elegans is a hybrid with revolutum, since it ages to pink on the petal tips.

I don't have experience growing in your climate.  There must be somebody who has tried these in a similar climate.  IMO, you should try all of them, and mulch the heck out of them to slow down the rate of soil freezing and thawing.  And you may have to keep the soil dryish in summertime.  Don't let the mice get them over the winter.  Let us know what happens.

Somehow I had the idea that E. revolutum was the most cold hardy....

It may be.  I'm basing my discussion on the native habitats only, since I have no experience with these plants in a very cold climate.

Personally, I'd just plant them all out and see how they do!
Erythronium grandiflorum is the most northerly of those you mention (and, I'd assume, the hardiest).  And, just for fun, here they are growing in the alpine zone west of here (Healy Pass, Banff N.P.) in what the 2000 Gov't of Canada Plant Hardiness Zones map calls zones 0a and 0b: 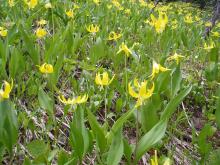 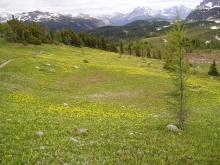 Lori, I've never seen them in such huge numbers.  Spectacular.  But if they are covered with snow all winter, they still may not be hardy in Minnesota.  If Rick replaces snow with mulch, it may work.  But as far as I know, none of the western Erythroniums will  tolerant warm, wet soil in summer.  So it will be a challenge.

My nicest stem of Erythronium elegans:

A forest of seedpods of E. revolutum:

When do they go dormant....

Soon after, or as seeds ripen?

In my climate, they go dormant right about the same time as the seedpods open.  You can see some leaves turning brown in the lower photo.  Everything is happening at least a month early this year, because we are having hot, sunny weather.  The last three years, it was rainy and cold until mid-June here.