Be of good cheer! The Drabas are here! Starting here at home:

Draba1; seed collected on one of the more "spare" boulders in a Bighorn Mountain meadow in 2009. It is always tiny and has needle-like leaves. Seed was sown on one of my "scattertroughs!" -no bother about actually trying to grow it which doesn't always work anyway.

Draba2; I believe came from Beartooth Pass many years ago. I can't say for sure how it got at the base of my front spruce -I never put a plant there -but it is really happy where it put itself. I've put seed on NARGS as D. oligosperma.

Draba3 is from a SPARQ/QARGS friend who states simply something to the effect of "nice small draba". I agree. The best of the seedlings has needle-like leaves. I'da thought these D. hispanica but Drabas are quite confusing. It does appear to be an azoides type. I've had a similar plant in a wall for years.

Draba4 is a favorite because it does one of the things that probably led me into rock gardening in the first place; big sheets of color! Draba sibirica (this may have come from Woodland Rockery) has a profound and delightful effect on the early spring garden -nothing small about it in April. Don't put them together but do plant 'Woodstock' hyacinth somewhere within eyeshot.

Draba5; not all Drabas are yellow. Draba x salomanii as sold by Woodland Rockery (long defunct) has persisted. It is compact and small. I've never seen a seed on it. There are others here: D.bryoides is putting on its little show just now. There's even a fuzzy I, unbeknownst at the time, bought as Androsace tapete. Such magnificent little things are'nt they?[tt][tt][/tt][/tt]

Edited by moderator: divided into paragraphs for readability.

Very cheerful indeed, Bundraba!  Your rock gardens look terrific from the views you've given us  - I'm looking forward to seeing more and more through the seasons!

A Botanist friend said that to identify Drabas he would need to see, the plant form,the leaves  the flowers, the seed capsules and the roots to be sure of getting it right. I don't think he was joking either.
Lovely plants. 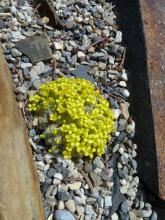 Well, this was very kindly given to me as Draba dedeana, but since it should have white flowers, I guess it isn't! 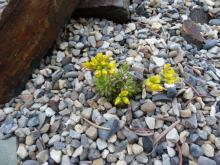 Lori; Your 'very kindly' looks a little like my fuzzy although I think its rosettes not so compact and fuzzier. I grew D. acaulis from exchange  seed years ago and might still have it if I hadn't put it in a vertical crevice that washed out. That plant was also a fuzzy. We must be wary the Drabas will confound us all!

Bundraba, I just realized that I had the photos mixed up in my last post... I've corrected them now, and D. acaulis is indeed the fuzzy one!  The pseudo-D. dedeana is not fuzzy.

Draba is an interesting genus. I think I like them all!
However, as far as I know, they are all yellow or white; or does red/pink ones exists?

Full of promise --Draba polytricha in a pot under cover.

Very nice, Dave.
Some of the less-compact ones can be quite nice too.
Draba ramosissima, in bloom and showing neat foliage later in the season: 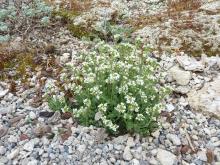 Draba kitadakensis (with Thymus neiceffii in the background): 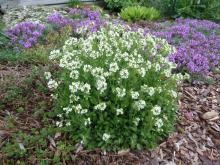 Modified from a spring draft: I found this growing in the Three Sister's Wilderness above Green Lakes in 2009. Hard to believe this thing is a Draba at all but that the seed pods give it away. Most of the plants manifested single rosettes, a few had two or three. Its big for a draba and has an over all rubbery appeal.It's displayed for interest only as all of the plants have melted away like butter in the summer sun. This might be D. aureola. 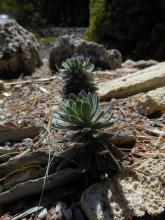 This came from one of the exchanges as D. cappadocica. It looks superficially like my little Bighorn Draba posted previously (and still doing well!) but has set no seed. 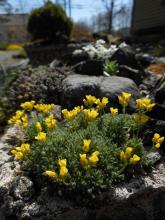 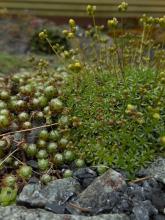 The first is weak and seeds only a little. The second is strong and threatening for such a tiny thing but who could deny any Draba garden space? It has wide bristly leaves and velcro seed pods. The entire plant is chitonous and seems a bit brittle like it's supposed to detach and set sail in steppe breezes, cheerfully spreading itself far and wide. Come to think of it: I'm not sure exactly how I obtained it; Exchange seed listed as D. polytricha perhaps? 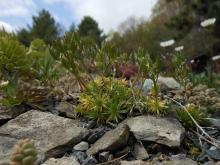 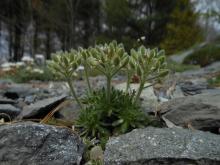 There were actually twelve distinct Drabas in my garden this year!

Lori I also have a less compact white one ---just about to bloom --tends to seed around heavily so i make sure the pods are nipped off each season.
I'll post a pic in a few days in the hope you or others might be able to identify it.