I have in Years tried to find

I have in Years tried to find out what is right and what is wrong in the names of the double grandiflorums, it's not always easy to find. I grow several double fors, some are quite different, other is not. I have tried to get some from Japan, only for see the form of the flowers, but they look not different as many other. A friend in U.S have been a great help for me and we believe to have found out something. In Denmark the is two named Trillium grandiflorum; 1. T.g. fl. pl. and 'Snow bunting' and after long searching my friend and I think "flora plena" and "Smith's double" is the same plant and maybe we also think "Snow bunting" is the same.

My friend have a good point; all double grandiflorum have been found in the nature in U.S and any of those have been named "Snow bunting" After that I found a description on the Internet; T. g. "Snow bunting" Full double white. Gardenia flowered. Traceable back to Dr Henry Teuscher, Curator of the Montreal Botanic Garden in the 1050's. He obtained it from Mr William Smith who had been given a few rhizomes by Mr James L. Smith, the postmaster at Erin, NY who found it in the local woods in May 1924. In 1966 it received an Award of Merit at Chelsea Show grown by Major & Mrs Knox Finalay of Keillour in Perthshire, Scotland. My friend and I understand the can be some doubt, because the double grandiflorum is not stabile in the forms of the flowers. I also know anothe clone from UK as are named "Bressingham clone" and it should come from Montreal Botanical garden. The is two stories about the plants from MBG; 1) Smith send 2-3 to MBG. 2) they were found in Canada near Quebec.

One of the double grandiflorum as I have is different, it's a plant called "Elkin form" I got it from a friend here in Denmark as are a old man today and don't remember so well. His storie sounds for me as a cock-and-bull story; Years ago Fred Case was in Scandinavia looking for a little Salix, he could not find it and my friend gave him a plant and as thank for the help, F. Case send him two Trillium in a burger box. The two plants was Trillium grandiflorum "Turckers form" and "Elkin form" For me a funny storie, but I know Fred Case and Henry Elkin both live in Michigan, so, can there be something right in the story? I'm still looking for other double grandiflorum with name or without names.

I live in Michigan and knew Fred Case and Harry Elkins.Unfortunatly we just lost Harry a few weeks ago. I have always understood Multi flora and Smiths dbl as the same plant. As for Snowbunting I had not heard of it until last year  when I recieved one in a trade. I have multiflora also so i will maybe see if they look the same.

I have seen Fred's Trillium collection and I don't recall seeing much variation in the named clonesfrom year to year. Thats just fom my expierence.

Harry Elkins is famous for going to Europe with plants and trading for other things. So that part of the story could very well be true. As for Fred's part all I can say is he never spoke of it to me but that doesn't mean much.

I forgot to mention that we

I forgot to mention that we had a Tuckers nursery here in Michigan. We have several things in our gardens from his nursery. Having dbl Trilliums with both those names is very possible.

It make me sad to hear Harry

It make me sad to hear Harry Elkin has passed away. Thank you Don for all informations, particular the informations about Turckers nursery is useful for my work with the double grandiflorum.

It's early spring here in Denmark and two of my Trillium in the garden have flower bud, a kurabayashii and a bicolor form of chloropetalum, plants as I have as a memory  from Larry Nell.

A couple of T.gradiflorum multiplex rest their oversize heads on Polystichum braunii 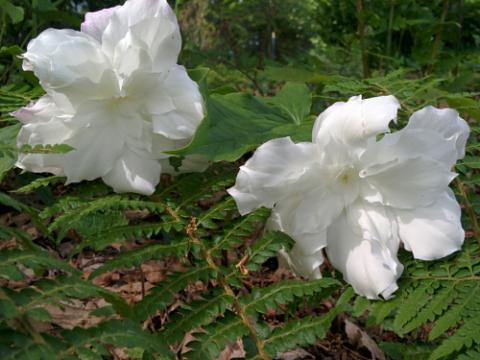