A critter with a very selective palate

For years now, I've enjoyed dachtylorhizas in my garden.  They've hybridized and seeded about, giving me an abundance I have shared with my rock garden chapter and several area nurseries.  But this December, some critter developed a taste for dach tubers and has been digging them up, leaving buds and white roots strewn about.

My guesses are raccoon, eastern gray squirrel, rabbit, or rat.  The digging is quite deep, even in mucky clay, so whatever is digging is good at it.

My two silly dogs tell me there's something around, especially in the evening.

I set rat traps but had no takers.  Has anyone had similar problems?  Right now, the garden is covered with plastic fencing and nursery flats, protecting swaths of dachs that are still intact.

sorry to hear of the damage of your beautiful orchids.

I have no idea what kind of pest you have over there but I have had the same kind of damage here, both at home and at our summer house. Here it is Arvicola amphibius  and Microtus agrestis which do the damage. I use carrots as bait in the traps.

I use this kind of trap:

My money is on the racoons or

My money is on the racoons or rabbits.  I have eastern gray squirrels and rats and haven't seen any serious digging in my mucky clay soil.  The squirrels dig in my big pots, occasionally in my seed pots, but usually don't dig in the ground.  After all it's so much easier to dig in a pot.  I have had moles come through and unearth plants however.  Whatever it is I hope you catch it.  Dacts are too nice to be critter food.

Rick Lupp suggested that I

Rick Lupp suggested that I might have a vole with discriminating taste, so I tried Trond's suggestion.  After 4 days, nothing.  I'll try an apple slice instead of carrot and see if I can catch something.  Others told me once a rodent develops a liking to something, it's not easily deterred.  I wonder if that what wiped out my Jeffersonia diphylla seeds this summer and neatly plucked my strawberries? 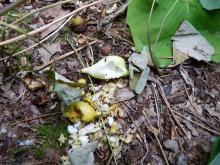 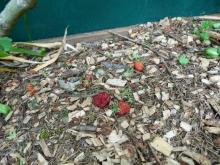 Sounds like chipmunks to me, but not sure if you have them in WA. For 14 years I've been sowing Crocus species seed in-situ, under late-to-leaf-out Hibiscus syriacus shrubs, an ideal sunny home for small bulbs.  Of my 4 "tree rings" where I grow small bulbs, crocus in particular, this year in a 2-day period, almost all crocus were dug up and eaten (leaving just the corm tunics) of hundreds upon hundreds of crocus in 2 of the 4 tree rings. In 14 years, the bulbs have never been bothered by varmints, but this year was different. Using Hav-a-Hart traps, I caught two chipmunks, these vermin evidently developing a taste for crocus. In 2014 the property became overrun with chipmunks as compared to previous years, but once these two characters were caught, there was no more digging and devastation in these beds.  I use a few almonds smeared with some peanut butter, of sure-fire interest to both squirrels and chipmunks.