Never heard of this one!

Lori, I've tried a number of times to grow this. I loved seeing it in Colorado near melting snow always, and love that fine brown line at the edge of the petals. Have never succeeded in getting it through a year - heat and humidity are not to its liking. My only pictures of it in the wild are unfortunately slides. It was always high - 12,000' at Loveland Pass and 13,000' at Mt. Sherman. At first glance it looked like a penstemon, then Panayoti identified it.  It's Just a beautiful plant.

Chionophila jamesii has been happily growing and blooming in my gardens at 10,000 feet outside Breckenridge, Colorado for 6 years.  It's in a west-facing, rather dry raised bed containing sandy, but very fertile, enhanced native soil.  The first photo was taken in 1999 by my husband Klaus Hendrix at about 12,600 feet on Hoosier Ridge, Summit County, Colorado.  This was an unusually large specimen --- flowers and foliage.  It was the only one in that area and no others that we found some distance away were that large.  We visited this plant every June for about 6 years but then it disappeared.  Maybe an animal ate it.  There was no trace of it and the rocks were not at all disturbed. 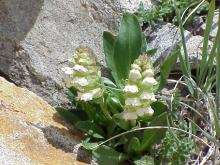 In 2004, I began a trial of this species at Mountain View Experimental Gardens.  It produces a slowly-spreading mat and after a few years, I took 2 divisions and replanted them in a hot, sunny raised bed facing south and a cooler, sunny raised bed facing north.  Chionophila jamesii is doing equally well in all 3 sites.  Here are a couple of photos of garden-grown specimens. 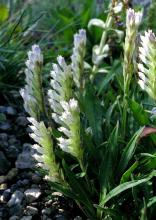 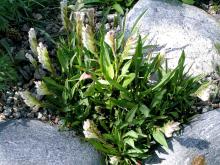 The flowers are white with a chocolate-brown border which gives them a pouty look when viewed from the front. 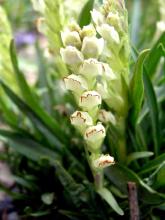 Hello Jane!
A very nice species, this one! I say as Todd: I've never heard of it! The fat specimen can be a polyploid one?

Terrific to see it in the wild and in the next-to-wild!  Thanks, Jane, and welcome!

So glad you made it over here with your fine first NARGS posting; a hearty welcome to the forum!

I've been aware of this plant for a long time, but must admit to never seeing it in the flesh, nor have I tried to grow it yet.  The plant reminds me of a stunted Chelone or Turtlehead; an interesting curiosity.  Checking the floras, I see there are two species, C. jamesii and the lesser known C. tweedyi; the latter perhaps not as attractive.  Here are some additional links:

Lori and Jane
I have been thinking of trying this little gem but have not gotten around to trying it yet. Your experiances in growing it make me hopeful. I see it listed by Alan Bradshaw in the Alplains Catalog. I will have to amend my order to include it.

A hearty welcome Jane ... excellent images of a beautiful species.  How I wish we had visited your fascinating garden when we were in Breckenridge a number of years ago!

Welcome to the Forum, Jane.  Wonderful pictures of one of my favorite plants in Colorado.  Mt. Sherman is a good location to see this, on the ridge (about 13,000') between Mt. Sherman and the mountain to the left, which is maybe Mt. Madison (or Mt. Monroe?).  We saw some pretty large plants there - with many bloom stems.
Lucky you to be so successful with it in the garden.

A rather pretty plant, which I assume is related to snapdragons?  Or is that just a superficial resemblance?

I have this in a trough where it has refused to bloom for several years: I think it will prove challenging in hot climates.

In nature, this generally grows above 12,000 in snowmelt habitats (not far from the likes of Ranunculus adoneus, another challenging plant to grow)....the off-beigy white color and singed lips are a tad off putting: I remember finding its cousin in Idaho years ago: C. tweedyi has vibrant lilac coloring, but is rather tiny and willowy in its presence.

I guess this is basically sour grapes: despite the smallness and borderline tawdriness, I would have loved to say I grew either of these well!

Definitely not for a hot humid climate like mine.  I think the color quite lovely, pale creamy white with a fine brown line at the edge, quite subtle.  We can't all be kniphofias, Panayoti.  I found it growing at 12,000' + in the Mosquito Range, not far from Claytonia megarrhiza, Papaver kluanense and Polemonium viscosum.    It keeps very good company, and I'd be thrilled to be able to grow any one of them!  To me, Chionophila tweedyi seems to perch on an inferior branch of the family tree.

A rather pretty plant, which I assume is related to snapdragons?  Or is that just a superficial resemblance?

Well, I guess it used to be thought to be related to snapdragons...  but, if I'm interpreting this all correctly, it seems Antirrhinum (snapdragon) has now been taken out of Scrophulariaceae (which includes Chionophila) and placed in a different family, Plantaginaceae.
ttp://en.wikipedia.org/wiki/Plantaginaceae

Chionophila is closely related to Penstemon though (re. Penstemons, Robert Nold).

Wonderful Lori, and just when I'd worked out how to spell Scrophulariaceae!  :rolleyes:

Definitely not for a hot humid climate like mine.  I think the color quite lovely, pale creamy white with a fine brown line at the edge, quite subtle.  We can't all be kniphofias, Panayoti.

I held my tongue regarding this plant, because I've never seen it in real life, and sometimes plants in the flesh can be far more fetching than they might appear in photos.  I have to agree with Panayoti, at least based on photos I've seen, the flower color is a bit off putting, the brown lines on the lips giving the impression of a flower going over and singed by heat of the day. :-X

To me, Chionophila tweedyi seems to perch on an inferior branch of the family tree.

And that branch is a tiny twig indeed, as the family tree is very short, just two species.

Mark, you'll just have to go see it in person.  It's getting a bad rap here.  Unfortunately I don't have a digital picture, but a really nice slide.

I'm very late to this thread- but currently debating whether to add one or the other of the two species to a seed order from Alplains.. both seem very charming, though I'm leaning a bit toward tweedyi..

Try them both, but if you can only get one my vote would be for C. jamesii, far superior to my eye.

Thanks, Anne; I'd love to try both eventually, but am trying to keep this order very small, since I am also making a couple of other orders...lol