Calochortus: Mariposa Lilies and their Relatives 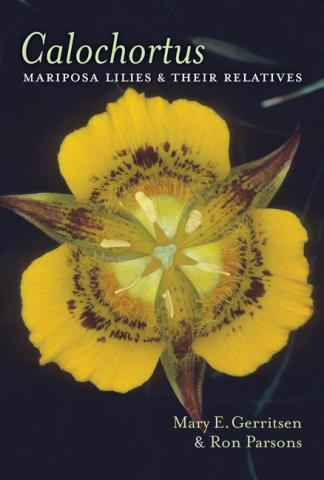 I can remember the excitement I felt on seeing my first Mariposa lily, Calochortus venustus, while backpacking in the Sierra Nevada Mountains of northern California many decades ago. Every new species I’ve encountered since has given me equivalent surprise and joy. 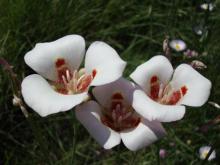 Calochortus is one of those rare plant genera in which every species seems to elicit wonder and admiration: so many of their flowers exhibit superb forms, patterns, and brilliant coloration. It was undoubtedly their beauty that drew Ron Parsons, a notable orchid photographer and enthusiast, to begin photographing them. Eventually he approached author and orchidist Mary Gerritsen with a proposal to collaborate on this book, and a fruitful partnership it was—Gerritsen has written a careful and thorough text that is complemented with exquisite “floral portraits,” mostly by Parsons but also other contributors.

The main body of the text is a taxonomic treatment of the genus relying on the most recent reorganization based on molecular genomic analysis. The 76 species ofCalochortus described fall into three subsections: Calochortus, Mariposa, and Cyclobothra. They are found predominantly in the Western US with a few occurring in Mexico and Central America. There is even mention of the various subspecies, many varieties and intergeneric hybrids. And except for a few instances, there are photographic images for all the genera, subspecies and varieties discussed. Particularly helpful are the numerous pictures of C. venustus, a baffling polymorphic genus with a huge variation in flower coloring and patterns—not a species I’m sure ever to have correctly keyed out. 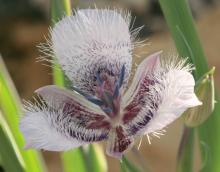 While there is no taxonomic key provided, an up-to-date identification key for the western U.S. species can be found on the web: Calochortus.

NARGS members will be particularly interested in the cultural information provided—both general and for individual species—along with sources for seeds and bulbs. And for history buffs there is a chapter on the major botanists who collected and classified the plants in this genus.

There are only two things lacking in the book: the first is the omission of images or drawings showing examples of Calochortus bulbs, as they are so definitive for the three sections—elongated and ovoid, with a membranous coat in the sections Calochortus and Mariposa and fibrous-reticulate in the section Cyclobothra. Secondly, it is regrettable that the index does not indicate by italics or other notation which pages display images. This necessitates much back and forth searching. C. nuttalli, for example, is mentioned on 19 pages—the image is found on the 13th referenced page.

But these are minor quibbles for an otherwise excellent and highly useful book. Note that this is not a recently published book (2007) and in fact I already owned a cherished copy before it appeared on the NARGS list of book review requests.

Before retirement Frances Burr was a research botanist in plant genetics.  She is a member of the Manhattan Chapter of NARGS and gardens on Long Island.