"Land Above the Trees" and "Beyond the Aspen Grove"

Beyond the Aspen Grove by Ann H. Zwinger,University of Arizona Press, 1988.

At the February 2016 meeting of the Adirondack Chapter one of our members, trained in horticulture in England, mentioned that the book, Land Among the Trees, had been required reading for a course she took on rock gardening.  I took note because this has been a favorite book of mine (first discovered after attending the 2010 NARGS Annual Meeting in Salida, Colorad0). I became a fan of Zwinger’s expressive writing style so, back then, I quickly followed up by reading her first book on the natural history of Colorado, Beyond the Aspen Grove.

With another annual meeting in Colorado coming up, the time was right to revisit both of these books as fitting preparation for my visit in June. I hope I can convince anyone attending, or for that matter anyone serious about rock gardening, to read these books.

“The alpine tundra of the United States has never been described for an interested novice.” So begins the preface to the 1972 edition of the book, Land Above the Trees: A Guide to American Alpine Tundra by Ann H. Zwinger and Beatrice E. Willard. Their book has attempted to fill this important gap. The two authors make a great team. Zwinger, as artist and astute observer, eloquently describes the ecosystems within the alpine environment with poetic flair, while Willard, formally educated in the environmental sciences, seems to be the “fact checker.” A huge bonus to readers is Zwinger’s wonderful botanical line drawings that are in evidence throughout the book.

Becoming a successful rock gardener is a lot about finding the right plant for the right place. An understanding of the native habitat where a plant grows and its ecosystem can be key to whether said plant survives and thrives. That’s exactly what this book sets out to explain – from the boulder fields to the talus and scree slopes to the alpine meadows, snow communities and wetlands. To each system, plants (and animals) have developed specialized adaptations. Part two of the book expands on specific tundra areas – all but one are out West, where most alpine regions exist.

I give the authors credit that they include a chapter on Mount Washington in New Hampshire, one of only a handful of eastern mountaintops where true tundra exists.

The book’s descriptions gave explanation of the plant communities I had observed during the conference day trips we took to various alpine regions. The writers’ assertion is so true that “Alpine communities, at first glance, may seem a tangled, incoherent mixture of plant species. A slight rise, an area of disturbed earth, a boulder pulled out of a meadow turf, may make havoc of the homogenous characteristics one usually associates with lowland plant communities of similar smallness. In the alpine region, one can sit in a gopher garden, rest one’s feet in a fellfield and put a hand in a sedge meadow. The alpine tundra is a place of infinite enchantment.”

The end of the book contains a 53-page table (and by its title, a “comprehensive” listing) of alpine plants contained within the continental U.S. along with information on their eco-community/habitat and U.S. and world distribution. These are wild species, some of which are to be found in our own rock gardens. Of course the reality is that many of these plants rank from challenging to next to impossible to grow in our own gardens, hard as we try to modify those elements that are within our control. This book, in describing the different alpine environments, attempts to give us a fighting chance.

A companion book, Beyond the Aspen Grove, this time written solely by Ann Zwinger (and I believe her first book in a long career as natural history writer), documents the natural world at Constant Friendship, her family’s seasonal retreat located at an elevation of 8,000 feet in the shadow of Pikes Peak. The land she describes is technically montane country and as such, makes this book a good preparatory assignment for NARGS’ upcoming conference in Steamboat Springs.

Using her keen observation and poetic prose, Zwinger walks us through the family’s 40-acre property from its lake and streams to its meadow and woods. Montane country is land associated with mountains capable of supporting both herbaceous and woody plants within a landscape taller and lusher than found in the harsher, and thus more stark, alpine tundra. (Returning from the tundra in 2010, we also enjoyed brief visits to montane regions as well)

If this book doesn’t make you ready to pack your bags and travel to the mountains out west, I’m not sure what will.

Carol Eichler is a member of the Adirondack Chapter and the editor of its chapter’s newsletter.

"Land Above the Trees" and "Beyond the Aspen Grove" 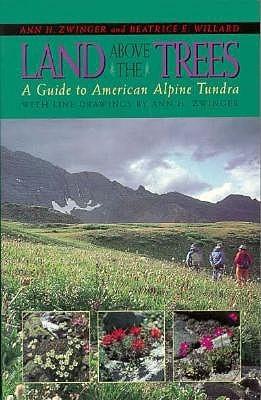