Steppes: The Plants and Ecology of the World's Semi-arid Regions 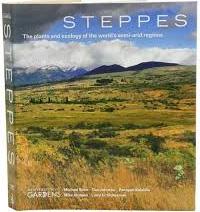 This ambitious book surveys the steppe habitats of the world, with a primary emphasis on botany and horticulture, but also giving serious attention to the geography, geology, and climate of these regions, as well as their impact on humans (and vice versa, how they are being impacted by human activity).

The authors are eminently suited to the challenge, all being on the staff of the Denver Botanic Gardens: “The mission of Denver Botanic Gardens is to connect people with plants, especially plants from the Rocky Mountain region and similar regions around the world, providing delight and enlightenment to everyone;” the Gardens’ core values are “transformation, relevance, diversity and sustainability.” The authors make clear that understanding the world’s steppes, and cultivating plants from them, are consistent with these values, for example in providing opportunities for landscaping in water-conscious regions.

The book is divided into six chapters; the first is an introduction and overview to steppes – what constitutes “steppe,” and where they occur around the world. Then each steppe region is explored in detail: the Central Asian, Central and Intermountain North American, Patagonian, and South African steppes. Each author tackles one of these regions, and brings his own voice and knowledge to the topic. However, the whole is harmonized by the consistent erudition of all the authors. Also, each chapter, after the general discussion of floristics and geography, has two sections which provide a useful common theme throughout the book: “Plant-People Connection” and “Plant Primer.”

The Plant-People Connections are fascinating reading in their own right, highlighting the peoples that have inhabited steppes through prehistory and history. The information on the cultures inhabiting the Central Asian Steppe was particularly new and interesting to me.

The Plant Primers are exceptionally thorough, cataloging the major plant families of each steppe, both in regards to the roles of their comprising genera to steppe ecology, and in their applications (actual or wished for) in horticulture. I will turn to these often to get ideas for new plants for my garden. The primer on the South African steppe was especially rewarding to read, as it brought a number of interesting genera to my attention – ones I didn’t know were South African, or that I didn’t know at all.

Who is the audience of a book like this? It is rich in detail, and can be consulted by serious horticulturalists, both professional and amateur, who are involved in landscaping with or cultivating steppe material. And it is beautifully illustrated, not only with plenty of lovely photographs but also with excellent and useful maps (I kept them bookmarked so I could get to them easily as I read the text); so any plant and garden enthusiast will take pleasure in browsing through the book. Because of its comprehensive scope, it will also be useful to botanists, geographers, and even policy-makers, and it is a must-read before visiting any of the steppe regions, for the tourist of horticultural bent, or anyone who likes to be well-informed about their destination.

My own steppe experience has been largely confined to exploring North America’s intermountain steppe, so I appreciated the many parallels the authors drew between one steppe region and the others; commonalities of climate and geography, as well as flora. I also appreciated their clear discussion of the challenges of delineating steppe – its hazy borders with adjacent biomes, and even its definition.

The botanical treatment is of course mostly focused on vascular plants, but there is one mention of the cryptogamic crust, soil-surface communities composed of fungi, lichens, cyanobacteria, bryophytes, and algae. These are very important to the ecology of the steppe, in stabilizing soil, fixing nitrogen, retaining moisture, and providing niches for seed germination. As the author points out, these are fragile elements of the ecosystem, whose destruction can have effects on the whole.

The overall quality of the book is very high, both in the layout and production, and in the editing. However, I was surprised to find that English and metric units are both used, seemingly at random – in some cases in adjacent paragraphs. A useful conversion table at the back is provided, for centimeters to inches and meters to feet (and formulae for Celsius to Fahrenheit); for the international reader, then, it would have made sense to stick to the metric system. There were only a few other slips I noticed, such as describing the flowers of tree cholla as yellow, where in the picture above (and in the Wikipedia article on Cylindropuntia imbricata), they are decidedly in the rosy-red end of the spectrum.

Of course there was not enough space to provide photos of all the plants and habitats discussed; I kept my tablet close and Googled those plants I needed to see a photo of. Sufficient for now; maybe someday, with this book as inspiration and guide, I’ll be able to see them in their steppe habitat!

Steppes: The Plants and Ecology of the World's Semi-arid Regions