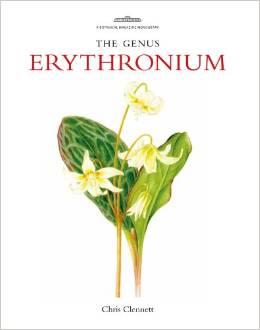 This is the first monograph to include the entire genus Erythronium, which has species in the Northern Hemisphere of both the Old World and the New. In format it adheres to the pattern of Kew botanical monographs, with chapters on history of study, phytogeography, morphology, studies of cell and gross structures, palynology (pollen studies), and phylogeny, ecology and conservation, and taxonomy. “Taxonomic treatment” includes the meat of the book, with “species accounts” (pp. 40–119) of 29 species recognized in this work. These are followed by brief treatments of hybridization and cultivation. Back matter includes a glossary of botanical terms, list of abbreviations, and selected bibliography, along with separate indexes of scientific names, common names, and cultivar and hybrid names.

Author Chris Clennett is a horticulturist and botanist, currently manager of the garden at Wakehurst Place in England, a garden associated with Kew; he has been at Wakehurst since 1987. His PhD dissertation focuses on Erythronium; he has also written on Cyclamen.

The book is illustrated with 14 color plates of botanical paintings by Christabel King, Pandora Sellars, and Meiko Konishi. These are all beautiful, though mostly somewhat idealized; Konishi’s Erythronium japonicum, in particular, does not seem to me to present an accurate visual impression of the plant in growth. In addition, there are color photographs throughout, mostly by Clennett; a few of these are of unsatisfactory quality, particularly those taken in natural habitat.

Most serious readers of this volume will probably already have a hand lens to use in identifying plants, and one hopes it is large enough to magnify text as well, since the designer of the book has chosen to set it in a very small type size, combined with a wide page, so that it is quite difficult to read. This is my most severe criticism of the book.

The species descriptions reflect assiduous examination of herbarium specimens as well as field visits and garden cultivation of many of the taxa. The synonymy in particular seems remarkably well researched. Identifying a living plant from the descriptions will require a good command of botanical terminology; there is no “cheat sheet” section to help the novice in this regard, and little in the way of subjective comments on the appearance of the plants. However, a “Notes” section under each species mentions species that may be confused with that under discussion, with notable distinctive characters. (One characteristic I missed seeing mention of is the lovely fragrance of some species, such as E. helenae and E. hendersonii.) A distribution map appears with each species, and these would have been more useful if the scale had been reduced (say to the US state level) in the cases of narrow endemics. The American species accepted accord in general with the views widespread in North American botany, along with sensible discussion of points of controversy, so readers need not fear that their pet taxa have been effaced by the gods of Kew, as we sometimes see.

Each species description includes a paragraph on cultivation. As is usual in British works, it refers to growing the plants in England, but at least we do not read “not in cultivation” under plants that we benighted colonials cherish in our own gardens. “The author is not aware of this species in cultivation” (p. 110, on E. pusaterii) is more tactful; this reviewer, however, is aware of it. “This species is currently unknown in cultivation” (p. 111, E. quinaultense; p. 71, E. umbilicatum) is a bit more daring, and calls for the emendations “unknown to the author” or “in cultivation in the UK.”

In summary, this book is a valuable addition to the libraries of bulb enthusiasts and those especially interested in North American native plants. Those who focus on cultivation might want more detail in that respect, but this is not the purpose of the Kew monographs. I hope more gardeners will be inspired to grow the less common species, which are easily raised from seed. Their flowering is brief, but Chris Clennett’s work should remain authoritative well into future years.

Jane McGary gardens near Portland, Oregon, and has specialized in growing bulbs from seed for the past 25 years. She is a former editor of the Rock Garden Quarterly and three NARGS/Timber Press books.