The Galanthophiles by Jennifer Harmer and Jane Kilpatrick (and related titles) 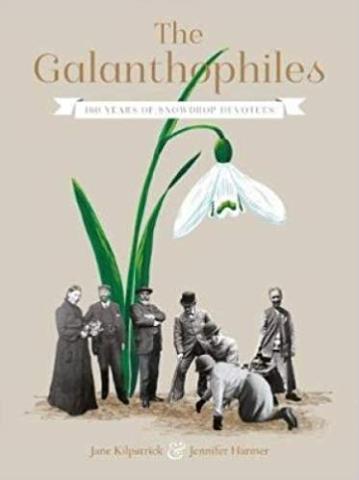 Reviewer:
Ernest Cavallo
I have hundreds of books about plants and gardens. Some are historical, some are technical and some are just beautiful. And most just sit on a shelf after an initial read. However, I have a special shelf devoted to the genus Galanthus with just eight books which are my constant companions from October until April when my snowdrops are in bloom. No surprise that I should covet books about Galanthus which translates as the "milk flower" from the Greek. After all my mother was a librarian and my father was the milkman.  But I digress. Let's go right to my world of snowdrops and books.
The latest addition to my library is "The Galanthophiles" published by Orphans Publishing and written by Jennifer Harmer and Jane Kilpatrick who have produced a lively, comprehensive, historical account of the handful of British Victorians who collected and shared snowdrops and wrote hundreds of letters about it to each other in a sort of non-digital version of Facebook. With archival material from the RHS and the descendants of these early galanthophiles, the authors entertain as they give context to the current craze for Galanthus. On the pages we meet legends, Sir Michael Foster, James Atkins, E.A. Bowles, John Henry Elwes and Lady Beatrix Stanley. We quickly discover that they were all just as crazy about snowdrops as John Grimshaw, Matt Bishop, Joe Sharman, Alan Street, Tom Mitchell and Anne Wright, the current luminaries in the hunt for the new, the unusual and the beautiful snowdrops. Well done Ms. Harmer and Ms. Kilpatrick! Rarely do I read about historical figures, put the book down and think, "I know someone like that."
E.A. Bowles, who figures prominently in "The Galanthophiles", wrote about snowdrops in "My Garden In Winter". However, there was no single volume dedicated to Galanthus until 1956 when the eminent botanist, F. C. Stern, published "Snowdrops and Snowflakes" under the auspices of the Royal Horticultural Society. I obtained a fine copy of this slim volume with pen and ink drawings and a few colored plates after a long search and at great expense. It has little practical use today. The taxonomy has evolved since the 1950s, and the few cultivars that he described are so well known that I would never need consult it. However, I keep it as a tribute to honor his work. Curiously, in this age when people are naming new cultivars for undergarments [ John's Y Front ] and dogs [ Mr. Stinker], nobody has named a snowdrop for F.C. Stern. I wish I had a really good seedling. I would do it in a heartbeat.

More than forty years passed before The Royal Botanic Gardens at Kew in association with Timber Press published "The Genus Galanthus" by Dr. Aaron Davis. Part of his doctoral dissertation, it too is a highly botanical book. Of the 245 pages, only the final 50 are devoted to garden cultivars. There are nineteen plates of lovely watercolors by Christabel King depicting some of the species and thirty-seven color plates of snowdrops in the wild. Not a single close-up of any named cultivar made it into this book.  I only use this book to identify some of the doubles which have dodgy provenances. Dr. Davis dissected and counted the number of the inner tepals. If the outer mark is right, and my mystery double has 23 inner segments, there is a good chance it is Cordelia. Thank you, Dr. Davis.