Flora of the Silk Road: The Complete Illustrated Guide 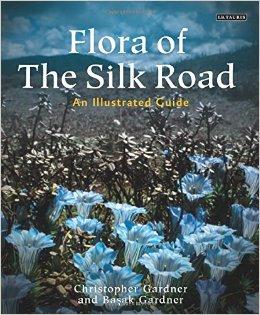 Flora of the Silk Road, an Illustrated Guide is just that, a snapshot and cross-section of the spectacular flowers found between Turkey and China.  But what a snapshot!  The photography is second to none.  Photos vary from macro shots to overall scenes, all taken with an artistic eye. It is obvious that the photographers, a husband and wife team, took their time framing each shot to provide the maximum impact.

To set the scene of this book, the authors begin with an historical account of the Silk Road and other major trade routes between China and Eastern Europe. They then delve into the various places they visited over the last 15 years with each chapter centering on a particular region.  For each region visited, they begin by providing an overview of the climate, geography and other pertinent highlights especially the region’s link to the silk trade routes.  In essence, each chapter is really a travelogue of the floral highlights seen by the authors in that region.  Each photo is described with regard to species, plant family, where the photo was taken, and the time of year; important information for future travellers to these areas who want to know the optimum time to visit.  The authors also describe the overall range of each featured plant to provide a more clear picture of the plant’s distribution and whether it is restricted to a particular area or more widespread.

The first chapter concerns Turkey, with floral highlights from the northwestern area, Black Sea, western Taurus and eastern Anatolia. Not surprisingly, bulbs are prominently featured among the plants described. They then travel to Syria, home of the Oncocyclus Iris, and were fortunate to visit long before the more recent upheaval in this country.  Next along the Silk Road they visit Iran, specifically the Alborz and Zagros Mountains, where in addition to Iris, they introduce you to the quintessential alpine, Dionysia.  In central Asia they concentrate on Tajikistan, Ammankutan, the Tien Shan, Pakistan, and Kashmir.  Juno iris, tulips, and a host of other bulbs are featured, along with the first sightings of more classic Himalayan alpines such as Meconopsis, Paraquilegia, and various Primula. The book finishes with the Chinese provinces of Sichuan and Yunnan, as well as nearby Sikkim.  This is the land of the Rhododendron, but the area is also famous for a vast array of Primula, Meconopsis, Saussurea, Rheum, Cremanthodium, Corydalis…and the list goes on!

I can only think of one criticism of the book.  While the authors do provide a map of the regions covered, it is an overall map of Asia, showing the Silk Road and other related trade routes.  I would have liked to see a more detailed map of the specific region covered in each chapter at the beginning of that chapter.  I found myself returning time and time again to Google maps to find the areas mentioned. On the plus side, it meant the authors were able to fully engage me in their travels!

This book certainly fits the definition of a coffee table book.  It is large and heavy, with over 400 pages, lavishly illustrated with 600 photos and illustrations.  The book has stunning images of plant species rarely photographed in the wild or seen on the internet. I find myself thumbing through the book frequently and also find myself wanting to travel the Silk Road. Time to book the flight!

Todd Boland is the Chair of the Newfoundland Chapter of NARGS.  He maintains the photo gallery on the NARGS website, as well as authoring the NARGS Plant of the Month feature. He works as a horticulturist at the Memorial University of Newfoundland Botanical Garden, a garden that has rockeries as one of the main focal points.  His private garden features primarily Asian species, both woodlanders and alpines.

Flora of the Silk Road