One of the highlights of the 2014 growing season was the spectacular bloom of Astragalus loanus in May.

I ended up with two plants, from the seed started in spring, 2012.  Seed was from the NARGS seedex, and germinated in 9 days at room temperature after it was scarified.  (I probably didn't scarify it too effectively; had I done so,  I imagine it likely would have germinated much more quickly.)   There was a small bloom in the second year from seed, but it really outdid itself in the third year from seed.

Seedlings at about 35 days after germination, grown under fluorescent lights indoors during the winter: 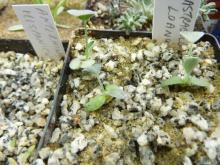 At the start of bloom, and then as more and more buds opened and more flower stalks developed: 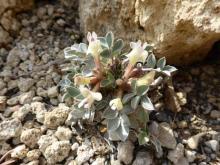 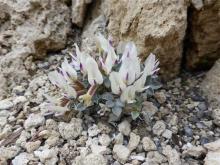 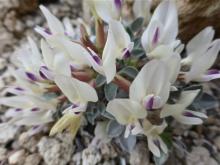 With a ruler for scale:

where have you planted it? Does it need protection during winter and do you need to water it in summer?

Hi, Fermi.  It's planted in

Hi, Fermi.  It's planted in the tufa bed (not in the tufa but between chunks of tufa, pretty much), with a tufa block behind it, which I hope creates a nice, warm spot.  (I attempted to follow the advice of Stephanie Ferguson, ne plus ultra alpine grower,  who (if I'm remembering correctly) told me that both it and Astragalus coccineus need the hottest, driest spots one could provide.  Well, so far, so good for A. loanus, anyway.  Guess I'll keep trying with A. coccineus!)  It gets no protection during the winter, and gets watered when the rest of the backyard gets watered - which would have been maybe 3 or 4 times this summer  (more often than usual, as the summer was very dry with little rain after June).

Very nice, Lori. Hope you succeed with coccineus as well!